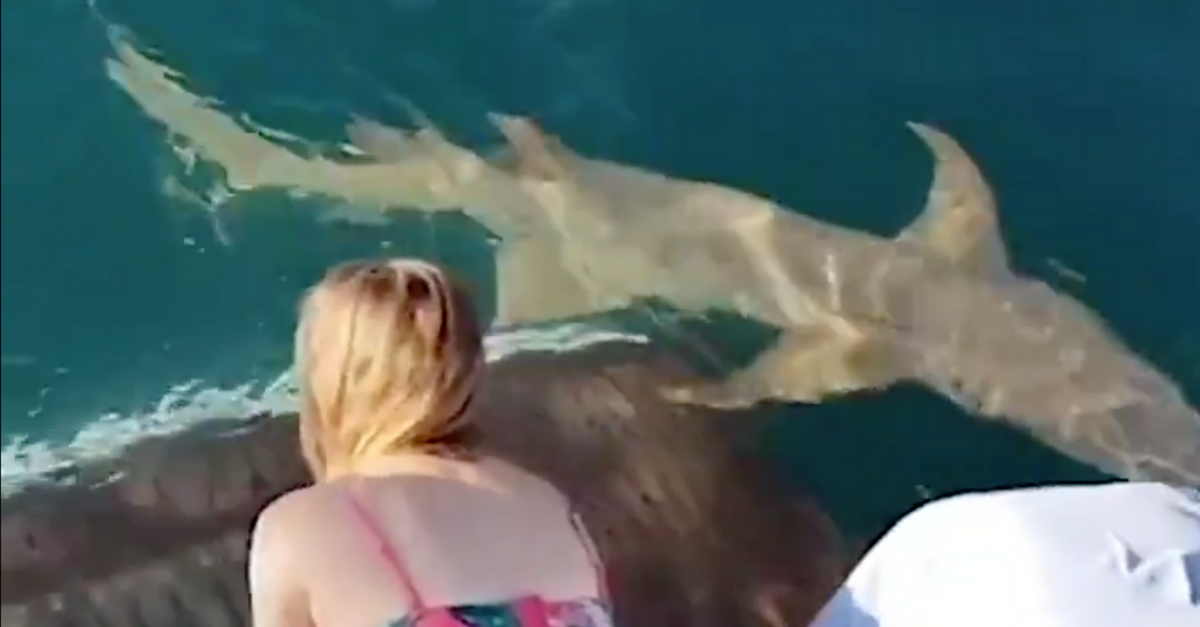 On the ultimate list of places a human being does not want to be in — above even “a music festival port-a-potty on the third day of a humid weekend” and “a fire” — is “a shark’s mouth.”

And really, even being near a shark’s mouth isn’t great, because that prehistoric, bone knife filled hole will happily come to you if it feels so inclined. Nature has a generally inconsiderate set of priorities.

Granted, shark attacks and shark bites tend to be rare, statistically speaking. Sharks don’t attack humans very often. However, it’s reasonably safe to assume those rates skyrocket when somebody decides to stick their hand in a shark’s mouth.

So, then, this Australian lady’s decision to wave her dumb, meaty paw near the terrifying death hole of an ancient, black-eyed sea beast born only to kill and consume, seems exceptionally questionable.

Here’s a video of the incident, which happened off the coast of Western Australia, courtesy of ABC News.

Shocking video shows a shark biting the finger of a woman that attempted to feed it in Western Australia, dragging her into the water. She escaped with a fracture and a torn ligament. https://t.co/EWT1bFltDZ pic.twitter.com/C3cK488F2Q

If this woman had been alive during the Neolithic Period instead of present day she’d probably end up being ripped to pieces by a bear because she tried to hug it while out foraging for berries.

According to Perth Now, the Australian woman was on a dream vacation aboard a “superyacht” when she discovered that sharks eat flesh.

The last of her friends to try feeding the three to four Tawny nurse sharks hanging around the back of the boat, what Ms Brunning didn’t realise until it was too late was that she shouldn’t hand feed the 2m shark, rather place the piece of fish in front of her and watch it go by and suck it up.

With a suction “like a Hoover”, the shark sucked Ms Brunning’s right index finger into its mouth full of rows of razor sharp teeth.

“I think the shark was in shock as much as I was … the only way I can describe it is this immense pressure and it felt like it was shredding it off the bone,” the 34-year-old structural draftsperson said. “I came up and I was like, ‘I’ve lost my finger, my finger’s gone’.”

To this lady’s credit, she definitely realizes what she did was dumb.

“This is not a shark attack, this is just a blonde doing a stupid thing.

“I’m not a shark victim .. I have full respect for sharks, I think they’re incredible. I’ve always had the opinion that when you’re in the water, they’re top of the food chain, it’s their domain.

The woman escaped the incident with some cuts and a torn ligament, but otherwise her finger was intact.

Lesson learned, because, suffice it to say, this shark has a mouth full of lessons. Though, in terms of the demons that usually swim off the coast of Australia, like the Great White Shark, a tawny shark probably isn’t so bad.

This story was originally published July 3, 2018.