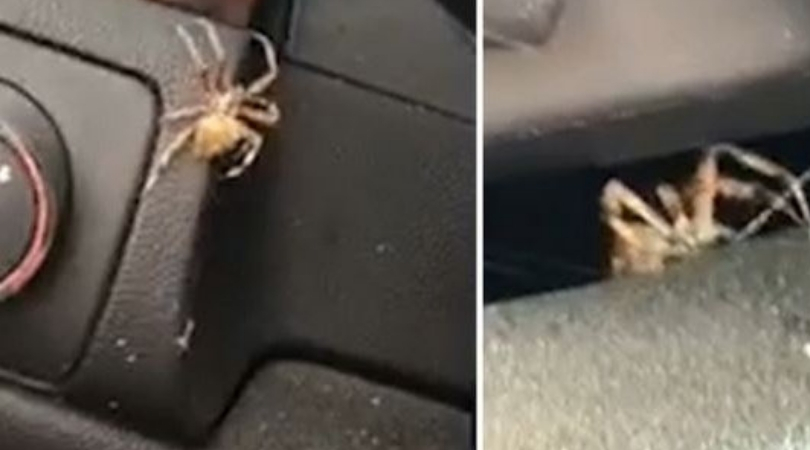 When it comes to spiders, I like to stay as far away from them as I can. I?m terrified of those hairy creepy crawlers that have no business being close to any human being. I can’t even begin to tell you how loud I get whenever I see one. It’s bad….like really, really bad. So, honestly, I understand this woman and her loud shrieking!

Virginia Sanders, from Summerville South Carolina, never saw it coming. What could have been a great day, ended in a hilarious but terrifying viral video that makes you want to laugh and cry at the same time. Why? Let’s just say Sanders developed a rather hilarious case of arachnophobia, as she saw a HUGE spider crawling through her dashboard. Sanders goes into full panic mode, yelling for her life as she sees the spider going back and forward into the vents and the steering wheel, playing hide and seek. I am pretty impressed with her ability to film the situation, drive, and simultaneously drop all the curse words she could possibly think.

The spider, who I really think was taunting her at some point, was later identified as a brown recluse, which is known to be venomous, though not usually lethal if bitten by one. The brown recluse is one of the spiders with medically significant venom, followed by the black widow spider and Loxosceles Laeta. As you can see in the video, these spiders are huge, ranging between 6 and 20 millimeters.

I understand the creepy crawler wanted to take a ride and maybe listen to some music, but NOPE. Not today. I give the woman props for staying in the car that long, I would have left everything in there and jumped out in a heartbeat. Luckily for Sanders, a friend came to the rescue and took the spider out of the car.

Watch: What You Need to Know About Brown Recluse Spider Bites Because They?re on the Rise