Warning: this video contains language you might consider offensive.

Bless you, internet, for some popcorn-worthy cringetastic video. A woman who began a recorded rant at a restaurant by criticizing two strangers for kissing in public eventually told them to “go back to whatever [they came from]” by the end of it.

The video has gained a lot of traction on Reddit after a link was submitted to r/PublicFreakout, fully equipped with LiveLeak video and some background information on what happened.

The story was posted by throawayfreakout.

Here’s what he wrote there:

Last night my girlfriend of four years and I were waiting patiently for a lady to order her food at this restaurant in Santa Monica, and I had my arms around her from behind and maybe kissed her on the top of the head once or twice, but that was the extent of it.

Out of nowhere, the lady (who was finalizing her transaction) looks at us and exclaims emphatically how inappropriate PDA was and how uncomfortable it was making her. I thought she was joking because of how little we were actually making contact. I turned and kissed my girlfriend on the cheek and made a loud smack, and that’s where she really lost it. I immediately knew I had to get this on camera, so that’s about where the video picks up.

We tried to stay as calm as possible. I was trying not to engage as I knew this lady was clearly nuts, but when she started calling my girlfriend a slut, whore, etc, and when she stepped closer to her, that’s when I started getting angry. In retrospect, I’m proud that we didn’t sink to her level or anything like that but wish I would’ve said some more clever remarks. Oh also, I fucked up by not filming in portrait mode – Sorry about that.

As you can hear in the video, the stranger begins by criticizing the couple for “making out” in public. Throwawayfreakout claims that “making out” was a couple of kisses on the forehead.

Later on, the woman accused him of “f****** [his] girlfriend in a public restaurant acting like a prostitute.”

“You’re sexually harassing me — you and that slut,” she says before demanding her money back from the cashier, who was making no requests for the couple to leave. “You’re a slut — go make out outside. You’re a prostitute — don’t you have any manners? Why don’t you leave, bitch!”

“Do you know how much I want to puke on both of you? You are the ugliest bitch I’ve ever seen — you look like a little boy,” the woman added.  “I’m American. I’m from California. Go back to whatever.”

“Go back you retarded foreign asshole,” she says before leaving the establishment.

You really have to wonder how she reconciles her language choice with her standards about public decorum.

This article was originally published on April 1, 2017. We decided to bring it back to remind you how not to act in public. 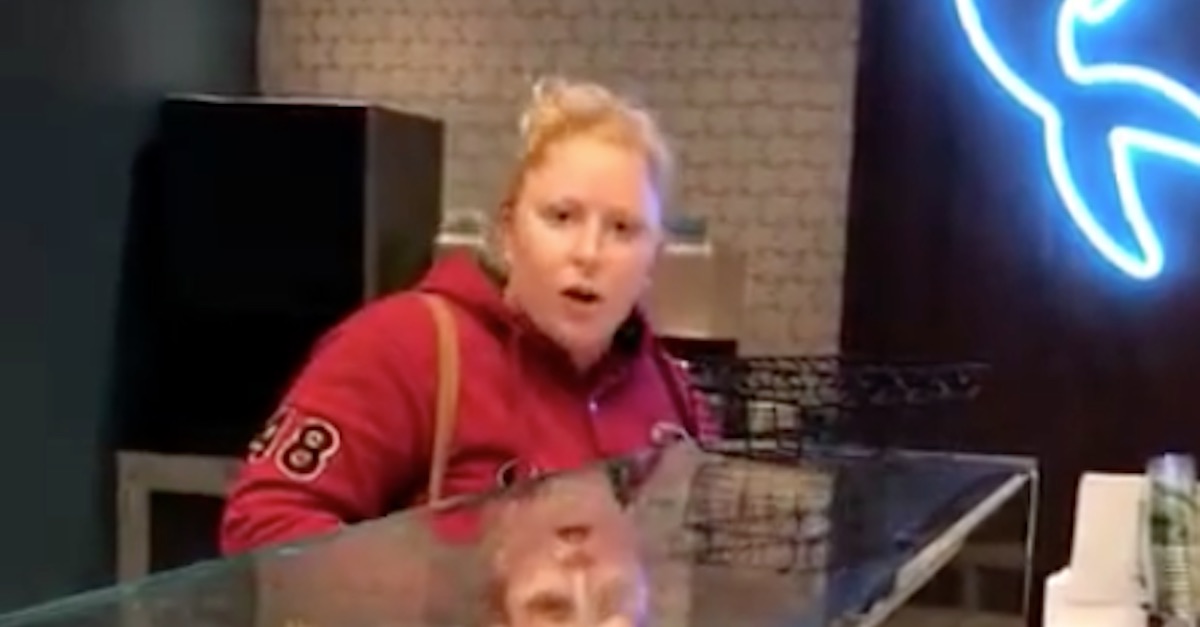