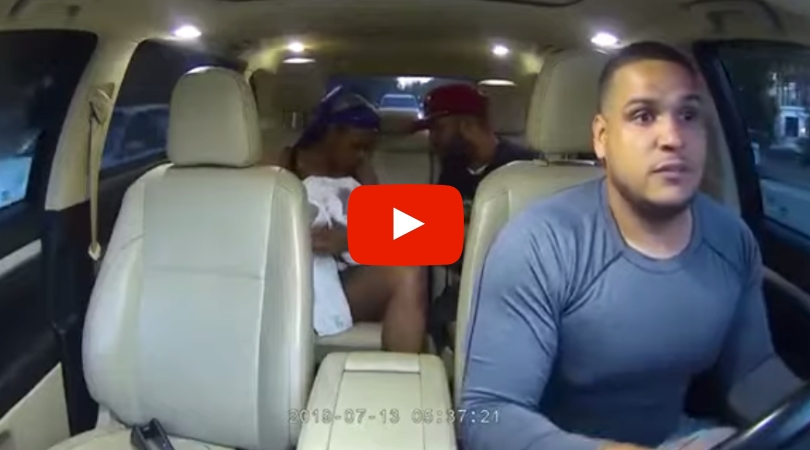 Not all heroes wear capes, some simply drive a taxi for a living. At least that’s what this video makes me believe. You know how some Lyft or Uber drivers sometimes offer snacks or water whenever you get inside? Well, instead of food, this New York driver offered some good coaching advice to a couple who requested a ride to the Brooklyn Methodist Hospital in Park Slope because the woman was in labor. This man picked up two people and dropped off three in a span of 10 minutes.

Basically, a few minutes into the ride, the baby girl was just not having it in her mother’s stomach anymore, that she decided to pop out. So naturally, the pregnant woman is seen falling on her back and begins to yell in agony as her contractions get more intense. That’s when the driver, Luis J. Leonardo, tells the mom, “Honey, you gotta breathe, Mami” as he turns around shocked at what is occurring in his car. The mom then tells him that the baby is literally coming out, to which he responds again, “Yeah but you have to breathe.”

So calm and collected. Honestly, this Taxi driver was a saint. If I was him, I would have cried and passed out right then and there hoping the man next to her could get ahold of the steering wheel. Can you imagine all that blood? Oh boy, yeah that’s too much.

After the girl is fully out, Leonardo quickly tells the man next to her in the back seat to look for some towels and make room for the baby. The cabbie then tells the man to call the hospital to let them know the baby was born and gives the new mom credit for her amazing wild birth story.

How does he finish his lesson? Leonardo tells the mother that everything is “Gucci,” meaning everything is “fine.” He also mentioned that he’d appreciate some help paying for the uh…clean up. Because you know that car is going to be bloody and smelly for a few days. The driver then tells the man next to the new mom, “You better hook me up with a little extra for the car wash man,” but is quickly shut down. Shocked at the situation, the man then tells him, “Man I’m broke, I didn’t think this s— was going to happen.”

Yikes. Talk about being rude. Your partner just had a baby in a man’s car, how are you going to respond like that? Also, show a little enthusiasm my friend, a human just entered the world in the back seat of his car. Leo could have easily just dropped you off and refuse to drive you. The least the couple could do is give him a few extra bucks to clean off their mess. Ah, Taxi drivers sure don’t get paid enough, we definitely take them for granted. Someone start him a GoFund me page or something.