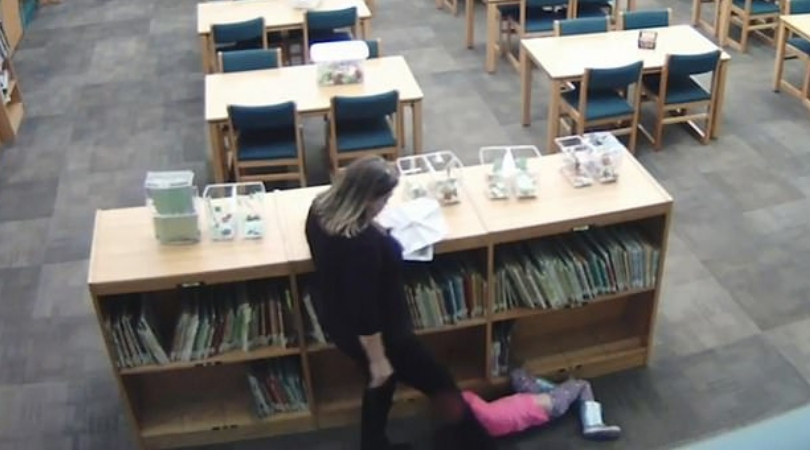 A Kansas elementary teacher was fired after a surveillance video showed her kicking a 5-year-old girl. According to authorities, first-year teacher Crystal Smith could face criminal charges over the incident, which took place at Bluejacket-Flint Elementary School Shawnee.

Smith is seen on camera yanking the kindergarten student, who was hiding in a bookshelf during library class. Smith leaves the child lying on the floor, but then returns and kicks the girl in the back, out of sight of another teacher in the room. School officials released the surveillance footage after the girl’s mom complained the next day.

The mom told authorities the girl had several large red marks on her arm, and kept saying her teacher was mean and was hitting her. The child did report the incident to her homeroom teacher, but she failed to report it to the school?s administration. When the mother confronted the Kansas teacher, Smith said she wasn’t surprised the child had red marks on her, since she was crawling in the bookshelf and shoved herself inside.

The child’s family decided to file a lawsuit against the school, claiming their daughter tried to report the attack to several people but was ignored. The mother also claims she wasn’t notified about what exactly happened until she asked to see video of the incident.

Attorney Dan Zmijewski, who is representing the family, said the girl is traumatized and is terrified of going back to school. Shawnee Police Department is investigating the case and the Johnson County District Attorney?s Office is also reviewing the case to determine wheater to press charges or not.

Smith was initially placed on administrative leave and was not allowed to have contact with the student, and was eventually terminated. The Shawnee Mission School District issued a statement saying they were deeply distressed by the video, and take the responsibility to keep their students safe very seriously by treating them with love and respect.