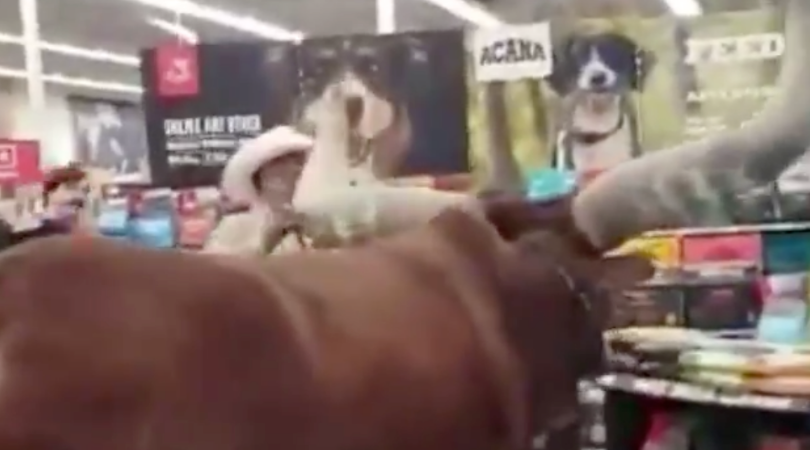 A Texas man who for some reason wanted to push the limits of Petco’s store policies decided to see how they’d react when he brought a giant steer with monstrous horns into the store. Petco has a policy that all leashed pets are welcome, so the guy tied a rope to a literal beast he owned and trotted it into his local Petco.

Why? Why the hell not? When you have giant animals at your disposal you might as well have a little fun with them. What are you going to do, just stare at them all day and then maybe eat them eventually?

Petco, of course, did not make the man leave. This is a lose-lose proposition for them though. Either they kick the man out for bringing a dangerously large animal into the store and everyone is like, “oH i gUeSs pEtCo hAtEz ANimULlsz hUh!?!” And if they do let it in, and it goes nuts and impales four kids and a poodle, they get sued and made fun of for letting the animal in by the same people who would’ve made fun of them for not letting it in if they’d refused the steer entrance.

But, thankfully, the horned beast didn’t lose its cool and start skewering innocents. There wasn’t a puddle of human intestines and bull urine in the Petco foyer. Instead, just one of the most Texas things you’ll ever see. A man taking a steer somewhere. The only way he could’ve made it more stereotypically Texan is if he rode in on a horse, leading the steer behind him.

Eventually this going to backfire on Petco. Someone — maybe a bored cocaine dealer? — is going to bring in a leashed Tiger for the lawlz and maybe an Instagram and then, yeah, people are going to die.