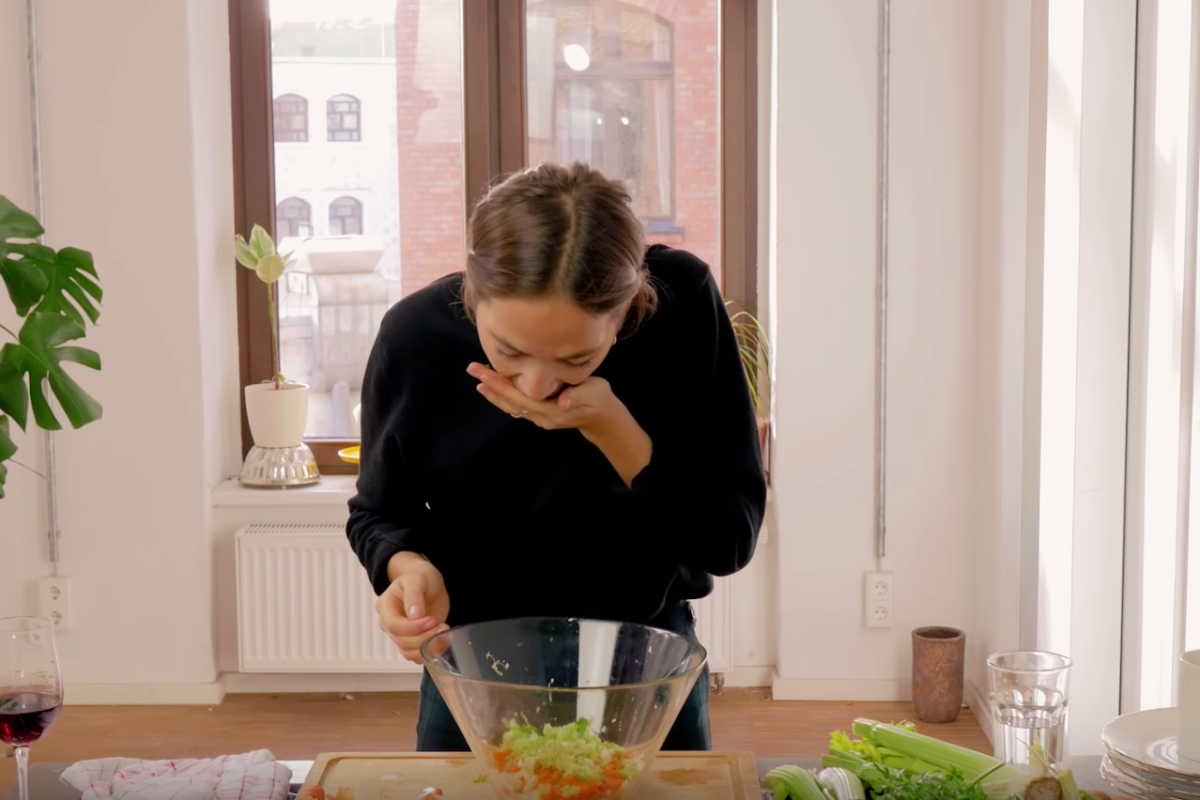 A newly-viral video demonstrating something referred to as “mouth cooking” has amassed tens of thousands of views and a whole lot of head-scratching, according to the Washington Post. Here at Rare, it generated a light-but-persistent nausea as well.

In the 5:55 clip, a woman identified as “Riva Godfrey” — played by Iska Lupton, an English woman who describes herself as a “creative director” and “food editor” on her LinkedIn page — makes stuffing for a turkey.

She uses no utensils or cutlery. Just “the safety and comfort of” her mouth.

Lupton begins by chopping and grinding onion, celery, carrot and parsley to form a mirepoix, a traditional French vegetable base. She spits it into a clean glass bowl. Next comes raw garlic, parsley, a raw egg, and bread, all cut and/or chopped and delivered to the bowl via her mouth.

She even pours the raw egg into her mouth before sliming it back into the bowl. Finally — no flavor left untouched — Lupton zests an onion with her teeth and smashes whole black peppercorns with her now-seasoned teeth, spitting the debris into the bowl too.

She then mashes the mixture, sticky with her own saliva, and crams it into (and around) a waiting turkey. Once the turkey’s baked, she kisses it and plates it with her hands. Interestingly, serving and plating are evidently not part of “mouth cooking.”

The Washington Post reports that the video was directed by an Australian filmmaker, Nathan Ceddia. Ceddia has played with his food plenty of times before in earlier works called (we are not making any of this up) “Cake Holes,” “Man Vs. Gut” and “The Glorious and the Grotesque.”

Predictably, the video has inspired a number of reactions from viewers. Oddly, the range of emotions conveyed in the YouTube comments section alone signal everything from pure disgust to wonder.

“Only edible because she’s cute. Totes wouldn’t eat that if it was chewed by a hag,” wrote another YouTube user.

“Hey, she used the oven! Liar!” wrote another.

“Gross. No thanks!” wrote the sanest person we could find.

Watch: This dog shoots water out of its butt every time it barks. Yes, really.