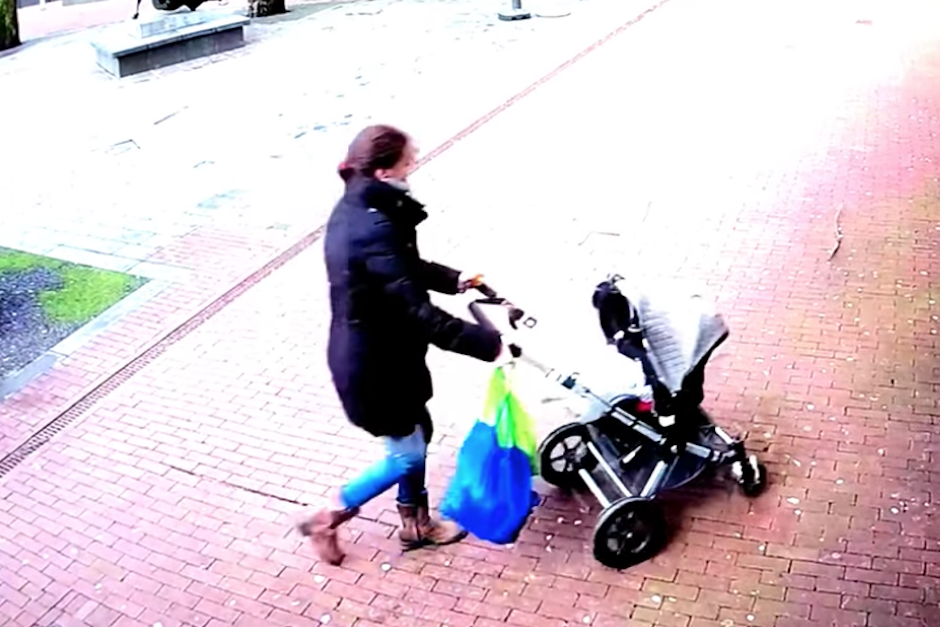 It’s likely every person’s nightmare to have a massive tree fall on them — it’s definitely not a pleasant thought — but this grisly scenario nearly came to fruition for a woman and her small baby during a huge windstorm in the Netherlands.

In the 31-second video clip, a tree can be seen swaying in the strong winds, while a bicyclist rolls past. Then, an unsuspecting woman walks into frame while pushing a stroller up a bricked sidewalk. Just as she nears a corner, the tree suddenly rips out of the ground and tips towards her, landing mere inches from the woman and her child. The tree appears to knock down signs from the awning the woman and her child are standing beneath.

One step over and the stunning video would definitely not have had a happy ending! And by “not have a happy ending” we mean the woman and her child would have been pancaked to death by a humongous log.

The Dutch nation had recently been hit with severe weather and deadly winds with enough force to rip roofs from buildings and flip trucks. According to the Washington Post, Amsterdam officials have been warning people to “stay home” and power is down for hundreds throughout the city. The Associated Press reported that the severe weather is responsible for at least six deaths in the region.

Two senior citizens in the Netherlands, a Brussels woman, a German firefighter, and a man camping were killed by falling trees while a German driver died when the winds caused him to lose control of his car. Investigators are reportedly looking into whether the windstorms caused the death of a 66-year-old man who died from falling through a plexiglass ceiling.

Social media users posted videos of the windstorms and they are eye-popping.

Today is an interesting day in our little country… #storm #codeRed pic.twitter.com/qQADBDVECL

Meanwhile in The Netherlands #CodeRed pic.twitter.com/NisWCtAHq4

This story was originally published January 19, 2018.