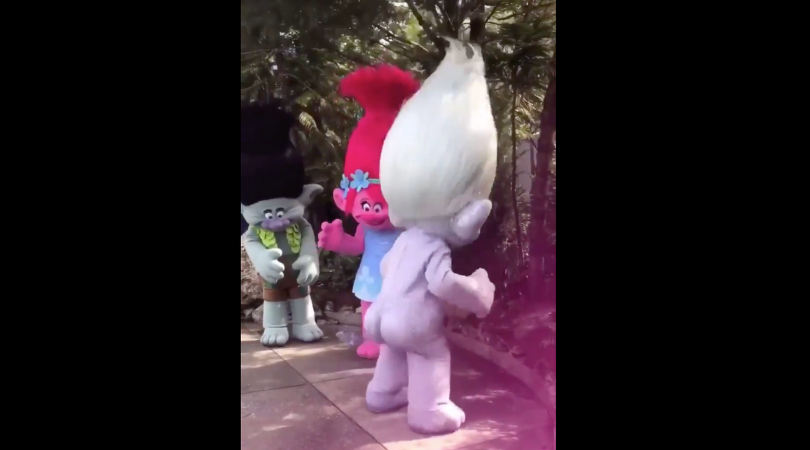 Universal Studios in Orlando, which is a Disney World-esque theme park but without all the characters and rides you like, has a new thing from a vaguely Disney-ish Dreamworks movie that is both wonderful and the dumbest thing you’ve ever seen, which is probably what makes so wonderful. It’s a troll, from the movie Trolls (which you are probably just now learning was not a Disney movie), that farts glitter.

Hell yeah. Why not? It’s Universal Studios. No one is going to care if they do anything weird and offputting. Plus this is in Florida. A life-sized glitter troll sharting on your children is one of the tamest things you can hope to happen to your kids at a Florida theme park. Hopefully, this glitter farting troll craps disco balls too. Universal Orlando should get this weird with all their rides. They should make it so that on their Back to the Future ride you can go back in time and strangle baby Hitler in his crib.

Marty: Gee whiz Doc this is heavy. I mean sure he’s Hitler but he’s just a baby. I don’t know if I can strangle a baby.

Doc Brown: You’re not thinking fourth dimensionally Marty! We live in a timeline in which Hitler exists but was never supposed to. Because Biff traveled back in time and got his mother pregnant.

Biff: Hey buttheads. Why don’t you make like a tree and get away from my son.

Let’s make this happen, Universal. In the meantime, here’s what you came for. Troll farts. A video of a troll farting glitter from Attractions Magazine.