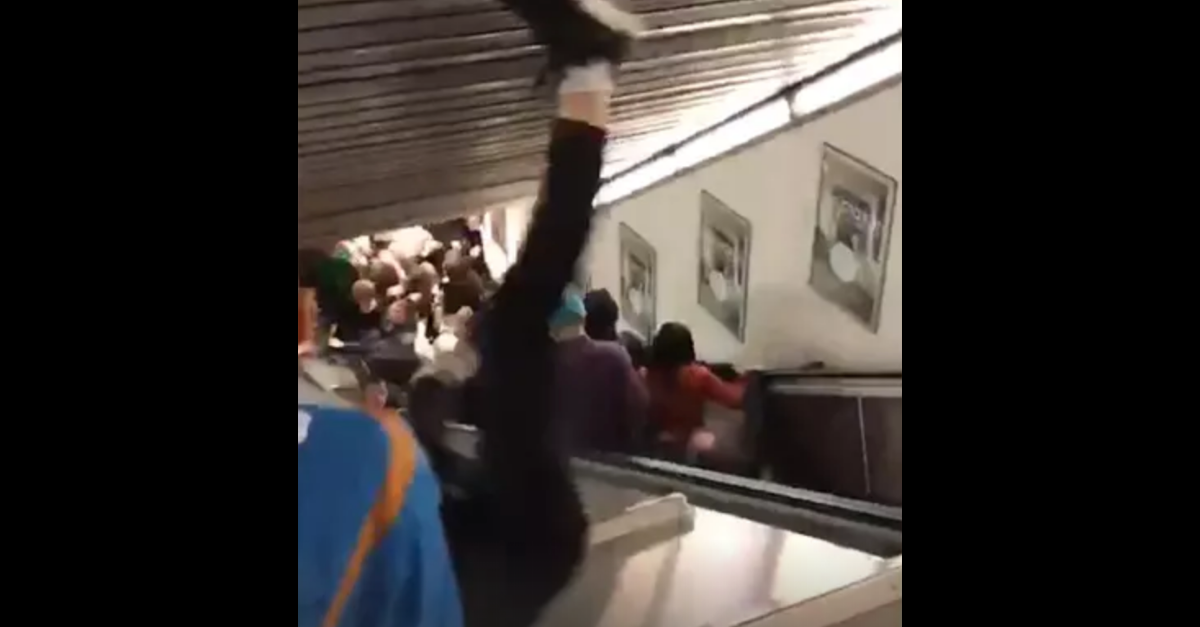 An escalator leading down to an underground metro station in Rome broke suddenly and sent people hurtling toward what probably looked like it was going to be a very Final Destination-y ending. The malfunction was caught on video. It appears as if some sort of brake or belt on the escalator broke, releasing all the tension.

Probably not coincidentally, the escalator was full of people when it broke. The crowd, largely soccer fans from Russia, can be seen being shot down the escalator toward the bottom, where a quick-growing mass of already tossed bodies was waiting. People can also be seen reaching out for the middle separator, trying to pull themselves off the escalator.

That would go from disorienting to fun to terrifying in the span of about three seconds. (If this were one of those totally horizontal airport walking tracks, though, this would just be amazing throughout. I’d go twice.) I’m not going to get on a crowded escalator probably ever again. I’m not going to get on any escalator for weeks without wondering about how long it has been since its last inspection. And also how competent its inspector is. Are they an alcoholic? Disenchanted with their job? With life? A disgruntled employee? Are they stealing escalator parts and selling them for meth money?

Kudos to the people in this video seen pretty much immediately hopping up and attempting to help their comrades trapped on the deathscalator. They don’t know what else is going on, so just up and getting the hell out of there would be an understandable reaction.

According to The Guardian, 20 people were hurt in the accident, one seriously. The majority of them were visiting fans of the professional soccer team CSKA Moscow, who were playing Roma in a Champions League match.