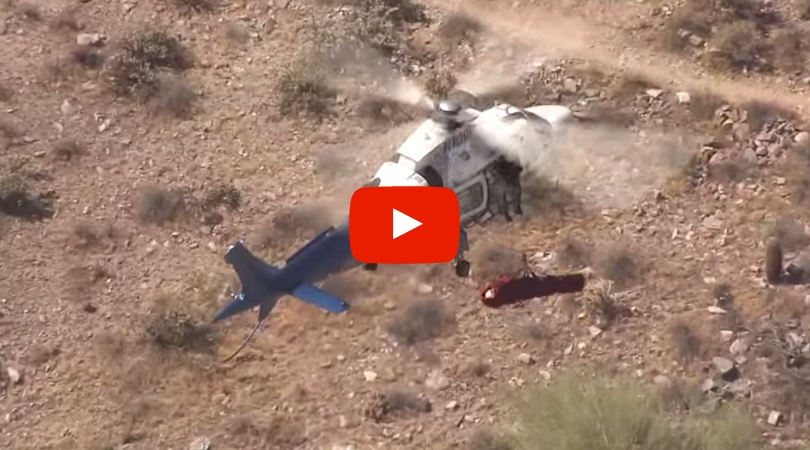 It was more than a bumpy ride for a 75-year-old Arizona hiker who as injured on Piestewa Peak, in need of medical attention. The woman suffered from facial and head injuries, due to a ground level fall. In an attempt to rescue the woman, Phoenix Fire Department found that the best way to help her was to airlift her through helicopter in a gurney. Unfortunately, while being rescued by crews, the gurney went madly under control, spinning at a ridiculous speed as she was hoisted into the air, making the woman seem like she was a human fidget spinner.

The dramatic video was posted on social media by an Arizona news station, where it obviously made major headlines. Several Facebook users commented on the video, showing concern for the woman, and shaming the rescue crew for not helping while in the air. Phoenix Fire Department quickly held a news conference, explaining that the reason why the gurney was spinning, was due to the air turbulence from the helicopter motor, which caused it to spin at a fast pace.

According to the Phoenix Fire Department Capt. Bobby Dubnow, this was nothing but a routine helicopter rescue, and the line that was supposed to prevent the stretcher from spinning had malfunctioned during the hoist rescue. Dubnow assures the injured woman was secured safely in a bag and basket, which had “multiple points of packaging.” Spinning, while sometimes rare, can occur during a rescue transport, but fire officials are “trained” to handle the situation if this were to ever occur.

The good news here is that the woman is in stable condition and suffered minor injuries. She did reportedly suffer from nausea and dizziness, because well, can you blame her? I would have thrown up then and there.

I’m just gonna go ahead and say she yeah sure she was fine…up until her rescue. Because she definitely had whiplash for a good hour after arriving at the hospital. Poor woman, she got the rollercoaster ride every 23-year-old dreams of, as 75-year-old. Can you imagine just spinning up in the air without being able to see anything around you? What was going on through her head? That’s what I want to know!

This maybe isn’t the worst helicopter rescue of all time, but it sure is enough to make someone consider whether to get on one next time they are in an emergency situation. However bad her injury was during hiking, this was definitely way worse. They are in for a hefty lawsuit, that’s for sure.