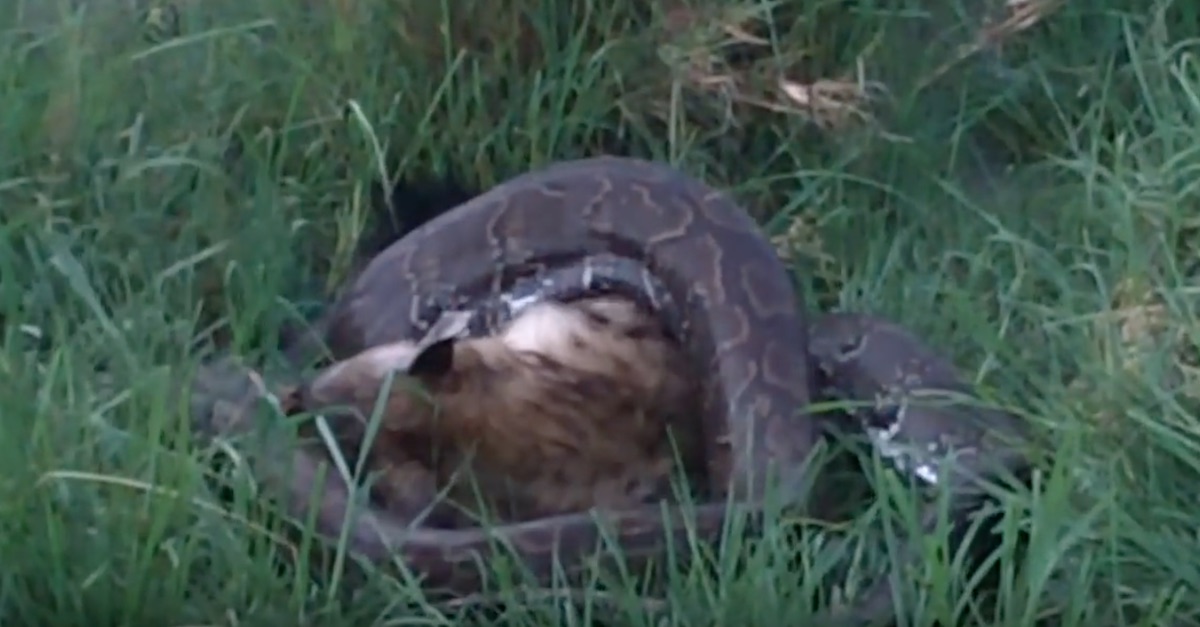 Byena. Too soon? Rock pythons appear to be out in full force in Africa, as yet another video of the non-venomous lethal constrictor has emerged.

First it was an antelope. Then it was nearly a leopard cub, saved by mom’s quick thinking. This time a hyena, who we’re guessing did not find this a laughing matter, has been victimized.

Video recorded by Dutch tourist Jos Bakker in the Masai Mara National Reserve showed a 13-foot-long snake putting the death squeeze on a 150-pound hyena and swallowing it whole.

According to National Geographic, research experts at the Fisi Camp said the kill was unprecedented “in terms of documentation.”

?To my knowledge there has been no precedent for this in terms of documentation,? Mike Kowalski said. ?Large carnivores can certainly interact with large pythons, as their cubs are probably on the menu, but an adult lion or leopard or hyena would likely dispatch the python very quickly.?

Kowalski said the python was a serious underdog in this battle.

?For the hyena, I would say this rock python had to be perfect,? he said. ?If it did not immediately strike and coil the neck-chest region to immobilize the head, the hyena could’ve easily crushed the python’s skull.?

Because the damage is already done and we’re already feeling maximum queasy, it won’t make anything worse to note that this meal will feed the python for several months in a safe, warm dining room of its choosing.

?[The python] will likely lie motionless in a warm, safe place nearby for a couple of months [and] will digest the hyena in totality,? Kowalski wrote in a blog post. ?Given a kill of this magnitude, it will not need to eat for several months after.?

This story was originally published March 16, 2017.

Watch: Mama Leopard Spots a Deadly Python Lurking Near Her Cub and Turns it into Dinner in the Blink of an Eye