Hours after North Korea violated UN sanctions by firing new ballistic missiles into the Sea of Japan, and just after Donald Trump and Japanese Prime Minister Shinzo Abe reviewed sensitive intelligence documents related to the launch in public view of members eating dinner at Mar-a-Lago, Trump took Abe to the wedding reception for the scion of a major Republican Party donor family.

All of this really happened. The launch came first.

The missile, a medium-range ballistic missile, was confirmed by U.S. Strategic Command and South Korea. It landed in the Sea of Japan, in waters that were not Japanese territorial waters, according to Japanese officials. It is a direct violation of United Nations Security Council regulations and a very real threat to Japan.

Trump and Abe were eating dinner at Mar-a-Lago at the time after golfing that day. They received sensitive intelligence documents at their dinner table between courses, using light from the smartphones of White House aides to illuminate the documents. This account was confirmed by Mar-a-Lago members posting photos on Facebook as well as reporters for CNN and the Washington Post.

Richard DeAgazio, a member of the club, posted photos to Facebook of Trump and Abe receiving intelligence documents and reviewing them by the light of aides’ smartphones. They’ve since been deleted.

To receive and review sensitive intelligence in a public place, seated among members of the public, waited on by Mar-a-Lago staff who may not have clearances at all, illuminated by questionably secure internet-enabled mobile devices is a breach of all known information security and top-secret intelligence protocol that’s nothing short of stunning. But that’s another story.

After a short press conference in which Trump reaffirmed that the United States supported Japanese interests, the pair departed, with Trump insisting they drop into a wedding reception at the club.

It was the wedding of Carl Lindner IV and Vanessa Jane Falk; Lindner is the son of Carl Lindner III, a CEO of American Financial Group. Carl Lindner III gave $50,000 to the Make America Number 1 SuperPAC and $50,000 to Future45 SuperPAC, both in support of Trump. It runs in the family: Edyth and Craig Lindner, an aunt and uncle of the groom, also donated $50,000 each to the Future45 SuperPAC. It’s not clear how many of the Lindners are members at Mar-a-Lago. Annual membership dues are $200,000, up from $100,000 before Donald Trump became President of the United States.

Trump appeared jovial as he addressed those gathered for the wedding, according to video posted to Instagram and later re-uploaded to YouTube.

“To the Prime Minister of Japan, I said c’mon Shinzo, let’s go over and say hello.” 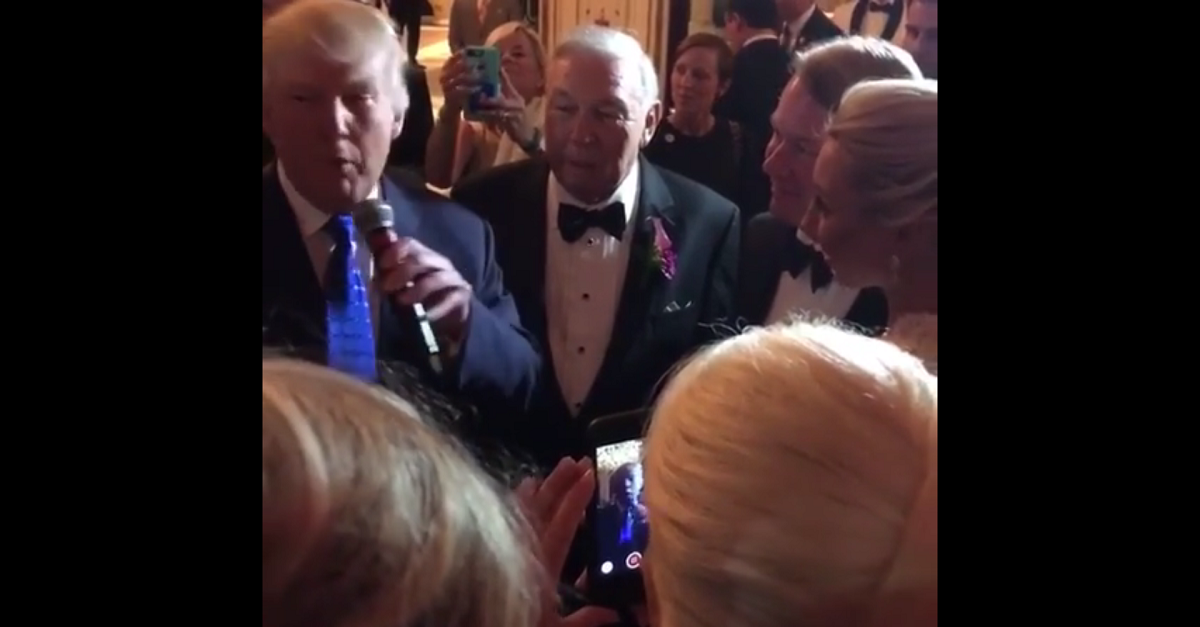