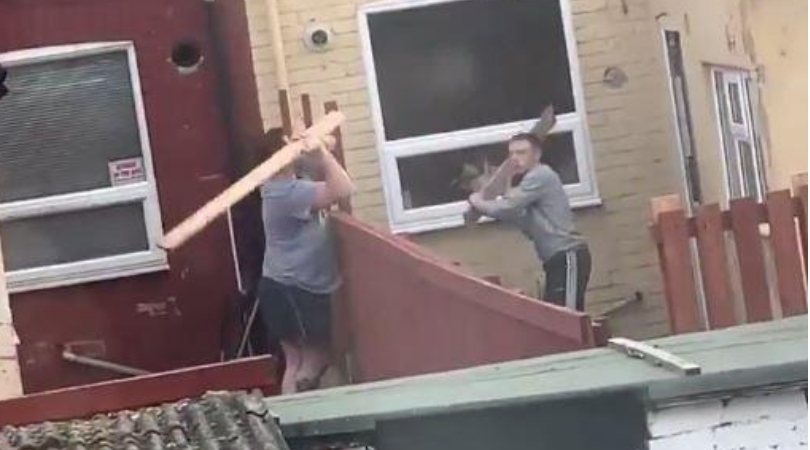 We can?t all have friendly neighbors, and this duo from England is the perfect example. A Twitter user, @stokoetaran, caught the exact moment two men began an over the fence plank war! Yes, forget punches, it?s all about a good old-fashioned wooden plank fight, am I right?

According to the Twitter user Taran Stokoe, he was awakened by the sound of his grandmother’s angry neighbors arguing. When he looked at the window he saw the two men throw planks of wood back and forth. A few moments later, a woman is then seen trying to jump in and briefly steps to referee with her arms raised between them both. Out of the nowhere, she remarkably doubles-down and actually starts to hurl her own plank of wood and other unidentified objects along with her partner over the boundary fence. You can?t hear what they are saying, but I am pretty positive they aren’t your friendly remarks. Let?s be real.

No need for an alarm clock at my Nanna’s house this morning when you have plank wars going off at 8am pic.twitter.com/rJH37JiKox

What makes this whole funny situation even better, is that if you look closely you can also see another neighbor watching from the upstairs window, and a curious little pupper gets close to check out the action. Both men eventually get tired and go back inside after the shocking interaction, but not before one of the neighbors throws the last wooden plank to the other side.

I really want to know what this fight was about, it has to be something really really good. Maybe someone was making too much noise and wanted to make even more noise to prove a point? Who knows, but whatever it was, I hope they solve it soon because what?s gonna happen when one of them needs a spoonful of sugar?

For any American viewers – don't be alarmed this is just a tradition in England. Morning plank toss allows neighbors to show love and affection by tossing planks of fire wood to one another to keep homes warm in winter. Huge love shown at the end when he tosses some back ♥️

It's a long standing tradition for us Brits. But it seems they got stuck in a morning wood toss love off. They just couldn't accept each other wood. It's super classy to see this in today's age. Real sweet.

Safe to say the video has now gone viral on Twitter, and several users have been putting in their two cents. A brilliant user even added some lightsaber noises to the video, which made everything 3 times funnier. So British, so amazing. Just your regular morning plank toss over a garden fence, another bizarre example of neighbourhood love. You know what they say, “love thy neighbour as thyself” or something like that.

Editor’s note: This article was originally published on January 28, 2019.