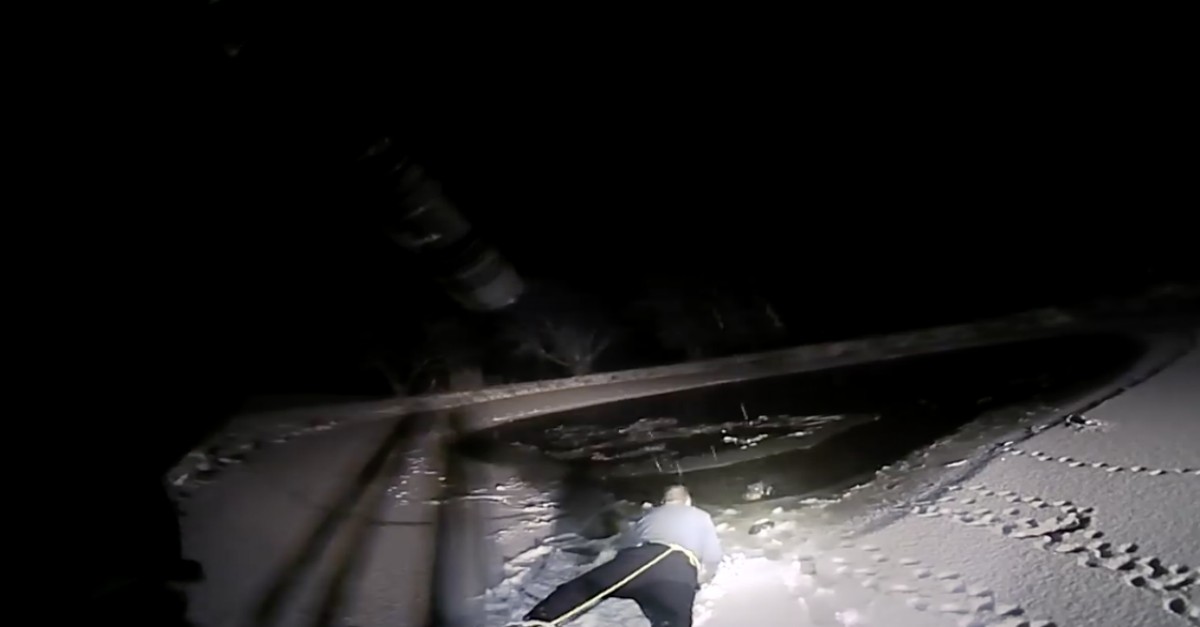 It was this New Jersey dog’s lucky day that someone was around to help him out. Nisel, the canine in trouble, had fallen into a partially frozen pond, and couldn’t get out. Luckily, Officer Robert Voorhees from the Hopewell Township Police Department in New Jersey was around to save the day.

The rescue was caught on the police officer’s body camera, catching the whole thing without a hitch. The video shows Hopewell Officer Robert Voorhees secured by a rope tied around his waist. Then, the New Jersey police officer crawls across the partially frozen pond, which, keep in mind, probably would have been a little safer if it was completely frozen. Officer Voorhees knew that there was a fair chance that he could fall into the icy pond at any moment.

When he finally gets to the edge of the pond, the police officer is seen reaching out to Nisel, who also impressively did her part in her rescue. Instead of freaking out and making the situation worse, the video shows the poor doggo swimming towards Officer Voorhees, who finally grabbed her by the collar to secure her.

Officer Voorhees and Nisel were then tugged to safety by other officers on the scene, who were ready to help in any way they could. Thankfully, Nisel did not suffer any serious injuries. The dog’s owner hugged Officer Voorhees and repeatedly thanked him for saving her dog when she was finally reunited with her best friend.

I’m not sure how that dog ended up out there by the edge of the pond in the middle of a New Jersey winter, but I do really appreciate seeing someone not mind slightly risking some hypothermia to save her. I’m also commending the teamwork here, because honestly, I’m not sure I know anyone who would slide across a partially frozen pond without any sort of safety measures.

Editor’s note: This article was originally published on December 26, 2017.