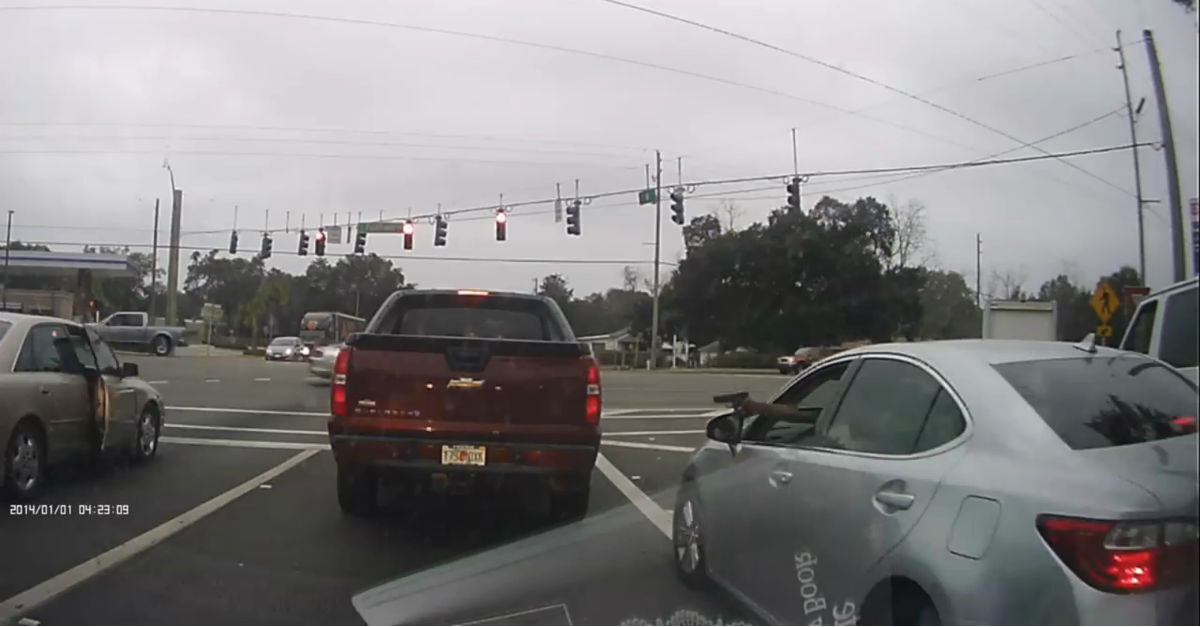 Driving on the road can often be unnerving when one considers that one’s safety also depends on the actions of other drivers on the road. Two drivers in Florida unnecessarily endangered the lives of several others on Tuesday when they decided to take their personal matters to the streets.

A video taken by a nearby driver’s dashcam and shared by the Escambia County Sheriff’s Office shows a dangerous confrontation between two people in the middle of a busy street.

The Lexus driver fires several shots at the Toyota. The driver of a red Chevrolet truck is stuck between them. Unable to drive forward without being hit by traffic, the driver is seen inching forward in what appears to be an attempt to get out of the way. The truck driver’s life is endangered when the Toyota’s passenger ducks behind it to shield himself from his assailant’s gunfire.

The Lexus driver then speeds away, turning right at the intersection. The Toyota passenger gets up from behind the truck and fires two shots toward the fleeing car’s general direction. Had fortune been different, any person in the vicinity of the two combatants might have been seriously injured or worse by the exchange of gunfire.

In fact, Escambia County Sheriff’s Office Chief Deputy Chip Simmons told reporters in a press conference that two of the rounds hit a vehicle carrying two children inside. About 10 to 12 rounds were fired in total, Simmons said.

ECSO said they recovered the gold Toyota and have arrested Olds. They asked the public to help them locate Harris.

The shooting was thought to be related to drugs, though police said they didn’t think it was gang-related in particular.

Anyone with information about the shooting or Harris’ whereabouts is encouraged to make contact with ECSO at 850-436-9620 or Crime Stoppers at 850-433-STOP.

RELATED: A State?s Law Enforcement is So Tired of Being Hit by Drunk Drivers, They Posted a Terrifying Crash