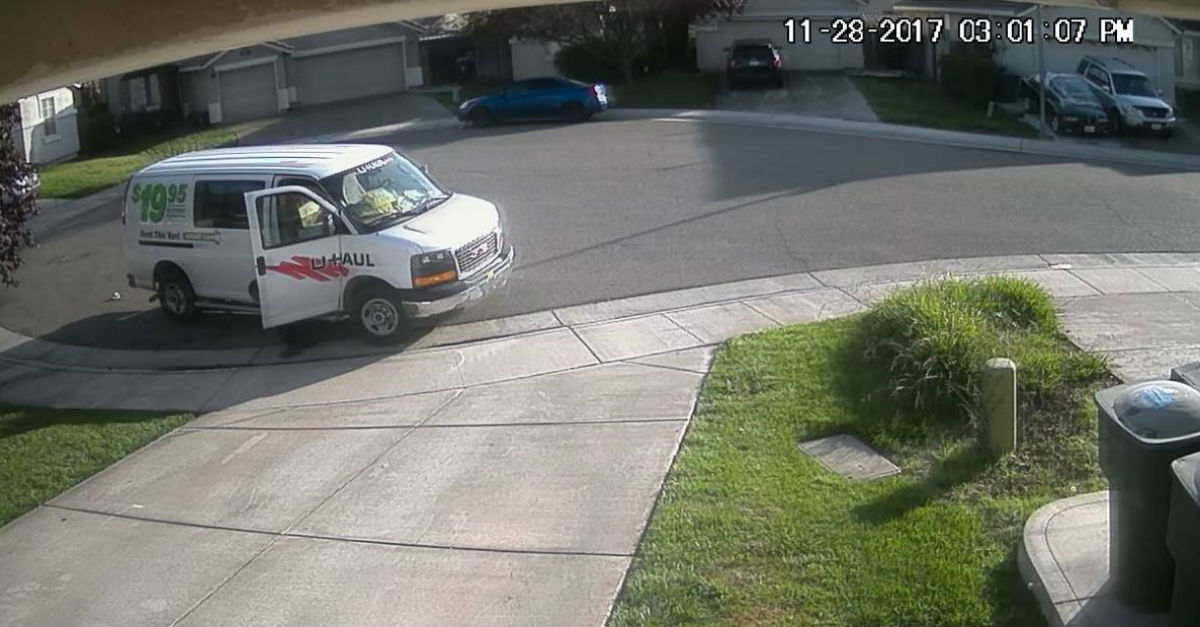 A courier delivering packages for Amazon decided to leave a little more than the box when he/she dropped her pants and pooped on the curb outside a house.

The driver, who has not been identified, was delivering a package in southern Sacremento, California, when he/she apparently couldn’t hold it in. The entire incident was caught on a surveillance camera installed in a driveway where the package was delivered.

Nemy Bautista, who owns the camera where the rogue pooper stopped off for some business, uploaded a photo of the driver to Facebook and tagged Amazon, asking, “Why is your driver squatting in-front of my house? Let me give you a hint…he/she is not tying their shoes!”

An Amazon representative quickly responded, writing, “Thank you for reaching out to us. I’m so sorry for this frustrating experience!” When Bautista said that he filed a complaint, the company followed up again, this time saying, “Thanks for the update! I’d still like to have my team look into this with you. At your earliest convenience, please send us your details at the link provided above.”

Bautista told KGTV that he got home and came upon the phantom floater at around 3 p.m. Initially, he thought that it was the work of a neighborhood dog. Upset at the discovery, he checked his security cameras to try and figure out which animal left the feces when he came across the footage of the driver.

The driver is not an official employee of the company. He (or she) is contracted out by the group to make deliveries and was driving a U-Haul truck, not one belonging to Amazon. Bautista says that a supervisor came out to his house and “was shocked when he saw the size of it.” The homeowner added, “He ended up scooping it up with a plastic bag but didn’t want to take it with him. It smelled really bad.”

RELATED: The net neutrality debate is anything but fun for Texas lawmakers

A spokesperson for Amazon told KGTV, “This does not reflect the high standards we have for delivery service providers.” The company also said that they gave Bautista a gift card.

As Amazon’s delivery services have continued to evolve, not everybody is happy with the changes. In October, they announced “Amazon Key,” which would allow their couriers access to customers’ homes. The kit that allows the service rings in at $249.99 and includes a camera.

And, Bautista isn’t the first person to get a package that they definitely didn’t order from the company. Recently, a woman claimed that she ordered a set of plastic storage bins from the company, but when her package arrived, she was shocked to discover that the bins were full of marijuana. She asked not to be named and said that she was in contact with the company for a month but never got to speak to a supervisor.

Amazon has been pushing for delivery drones for a while now, but they’ve met with a lot of legal hang-ups in that endeavor. Nevertheless, the company continues to innovate, and just this week, they secured a patent on a drone that will self-destruct if something goes wrong en route.