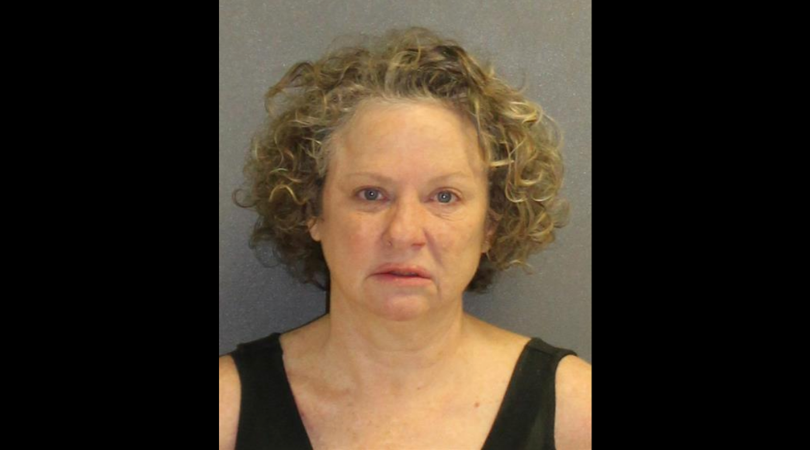 Julie Edwards, a Florida woman more closely resembling human waste with a mouth and some teeth than an actual person, was arrested for drunk driving in Deland, Florida by a black police officer and, because the woman is trash, she decided that this was not okay, racially speaking. He, a black man who puts his life on the line to protect, serve, and better the community dared to arrest her, a drunk driving wet sack of pubes that happens to technically be a white woman? “I think not,” thought it.

So the dumpster with a blond wig hanging from one of its corners threatened the black police officer with visits and violence from the Ku Klux Klan. All for committing the offense of doing his job and protecting the community. By preventing her from existing in her then-current state around them.

All of this was caught on video by the officer’s body camera.

Let’s break down the best quotes from Edwards, whose voice sounds like it’s coming from a sphincter that smokes a pack a day, shall we?

“I’m suing the fuck outta you and you know what? I’ll buy me a house because of you.”

You know what they say, “Shoot for the moon. Even if you miss you’ll land extra charges.”

Spoiler alert: “It” is in reference to the officer arresting and booking her so he does, in fact, keep it up.

Is it wrong that I kind of love that she refers to people she knows in the Klan the way you or I would refer to a lawyer or car dealer we know? “Oh, you’re looking to buy a new car? Lemme hook you up with my guy.”

She has people for racist vengeance. Peak trash.

You fuckin’ with the wrong white people.

All due respect ma’am (note: no respect is due) but you’re inland Florida swamp trash. If the many Burger King managers I’m sure you’ve threatened with a rubber flip flop you pulled off your foot haven’t taken you seriously then no one else is going to at this point.

“Hey, there ain’t a damn thing wrong with burning crosses in your yard, is there?”

There is something wrong with that! That’s why we’re here making fun of you.

Unless there’s a mirror she’s speaking into that we can’t see in the footage, this is an inaccurate statement.

I would pay money to watch this lady watch this video in court when she’s sober, try to act like “that’s not the real me,” and then listen to her get reamed by the judge. Please sell tickets to this, City of Deland.

“Your eyes’ll be poked out you know.”

She’s really just throwing Hail Marys at this point. What does she expect to happen? Does she think one of these threats are going to actually land and the cop is going to be like, “Oh… oh my God. I’m so sorry. Please tell your powerful white friends, such as the man at your trailer park who makes twelve thousand dollars a year stealing satellite TV and selling the illegal stream to park residents, that I’m sorry.”

Wellllllll that was only a matter of time, wasn’t it?

She’s going to have a really fun time explaining what she’s in for to her fellow residents at the county jail.

“Send all you fuckers back [to Africa]. Burn the rest of ya.”

Can we send you back? Into the septic tank you crawled out of?

“My KKK friends will burn your family.”

Lady. You know he arrested you because you’re a piece of shit and he’s a cop, not because he’s black and you’re white, right? Oh you don’t? Cool. Again, I’d loooooooove to have tickets to her hearing.

Lady, nothing you’re threatening this guy with is worse than existing as you so it all your threats come off as pretty impotent and sad.

Easily my favorite part of this video, however, is the end when you can clearly hear the cop singing along to a Luke Combs song to get the sound of shrieking dogshit out of his ears. Keep on keepin’ on officer.

This article was originally published on February 15, 2019.