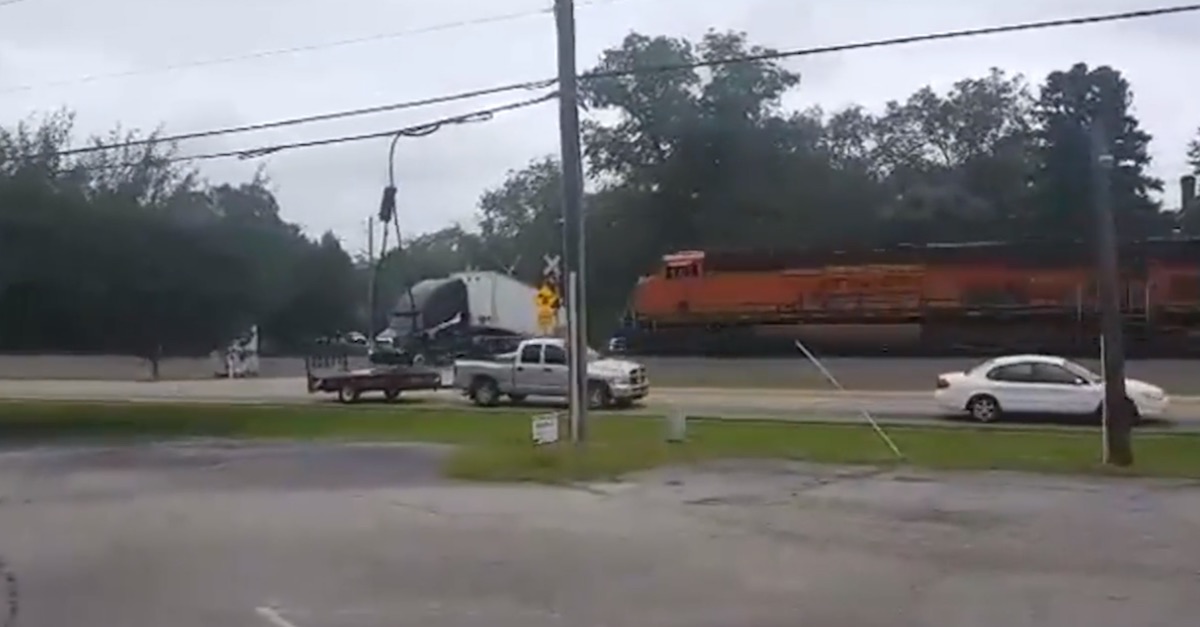 One truck driver who had apparently ignored key road signs is lucky things weren’t a lot worse than a totaled semi-trailer on Thursday, as a train that didn’t have enough time to stop plowed right on through.

RELATED: A truck driver who couldn’t wait two seconds for a train to pass got slapped by instant karma

The crash happened just after 11 a.m. on Thursday in Henry County, Georgia, on a crossing that is notorious for getting trucks stuck.

The Atlanta Journal-Constitution reported that the truck filled with candy got stuck on the tracks after the driver ignored key road signs warning of the train crossing, making it his fault.

Police say the truck driver ignored this sign and got stuck on the track. Luckily, he got out of his cab before the train hit. pic.twitter.com/de1nWKEC44

Kelli Nichols filmed the video and told WSB-TV that it shook her to the core but is thankful the trucker got out before impact.

Video from another angle shows candy fly all over the place.

“It did shake me to the core, but I was thankful that I could tell that there weren’t any people in the truck,” she said.

Another local, Maryann Morfoot, confirmed that this crossing has been a problem for a long time.

“I wish the truck drivers would read the signs,” she said. “Our fear is always that something on a train would be dangerous, and there’s no way for us to get out. Luckily, this time it was just candy. I’m glad it was just candy.”

Police said trucks get stuck there about once a month.

RELATED: Police say that a couple hugged before they laid down on train tracks in what appears to have been a suicide pact

Since the trucker was given fair warning about the tracks, he is being cited.