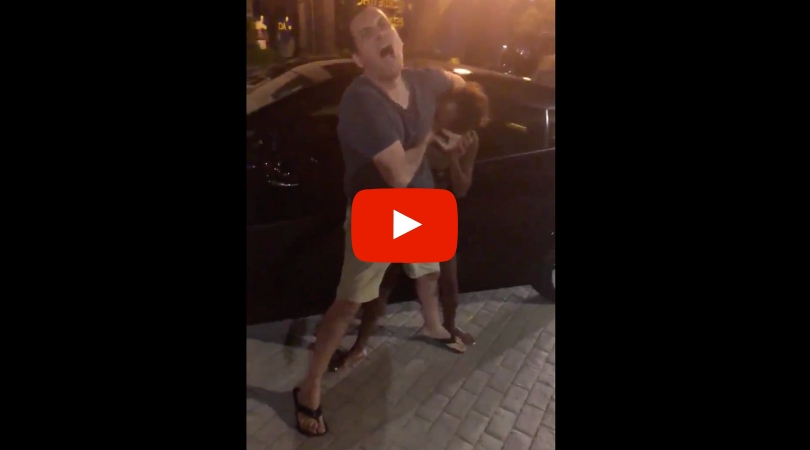 I’ll admit it, sometimes Uber rides can be torture. Either the Uber driver keeps talking his butt off or he is just driving like a maniac so I’m resourced to praying for my life. It can honestly go either way. BUT, I will say that I respect the heck out of any ride-share driver because sometimes passengers can be crazy as hell. Like in this case, where Tasheena Campbell decided to become a zombie and violently bite her Uber driver.

Dramatic video shows the woman chilling on the top of the hood of an Uber vehicle, breaking the windshield wipers and then attacking the driver for no apparent reason. The women then decided to open the door of the Prius, tried to get inside, but luckily the driver grabs her, pulls her out and throws her to the ground. Which I don’t blame him, this woman clearly has issues. I wouldn’t let this woman drive my car either.

Lol i can’t make this up , Last night i witnessed the zombie apocalypse 😂. pic.twitter.com/Z4rgBjGDmn

Not giving up, the woman throws a punch and begins to attack him. Thinking quickly he puts her in a headlock to restrain her but she begins to bite the driver, Yasser Hadi, on the rib cage leaving a substantial wound. Hadi said the bite was so painful, not even a dog bite would last that long.

How did this whole altercation begin? According to Hadi, he had just dropped off a passenger when the zombie approached his vehicle and started arguing with him out of nowhere, and then attacked Hadi’s car. Comparing the incident to a zombie apocalypse, Twitter user @ImsoRico was able to capture the video and posted it online.

Atlanta police later arrested the woman for the ‘unprovoked attack’ and identified her as the 26-year-old Georgia woman. She was arrested for criminal trespass and battery. According to authorities, she had two prior warrants related to probation violations for a traffic offense and a simple assault. Which just makes me believe she is no stranger to danger.

FULL STORY: An Uber driver was dropping someone off as a woman jumped on his car, ripped off his windshield wipers & attacked him. The man was hit, scratched & bitten. This is disturbing to watch & now the driver needs help with medical bills: https://t.co/sO7vqgKbdP @FOX5Atlanta pic.twitter.com/zXGorWktdr

The police report stated that while Campbell was brought back to the station, she decided to just urinate all over the floor and began to bang her head against the wall. So, she was physically restrained, because that’s just gross and crazy.

I guess this just goes to show you that sometimes people can do wild things while on drugs. Well, at least that’s what I want to believe because no way this woman was sober. No human acts like this.