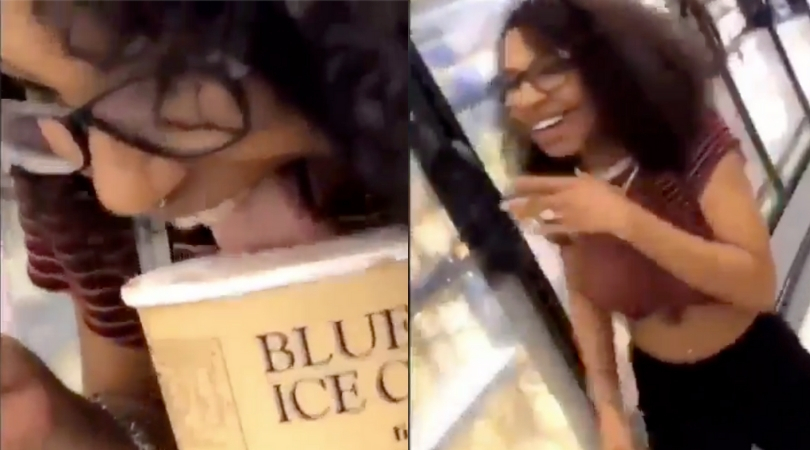 Yuck, yuck, yuck! I really hate people, especially those who do things just to get a dumb follow or are in search of fame. Like in this case, where a viral video has made its way around the internet, showing a woman licking Blue Bell ice cream inside its container. Not only that, the woman laughs after she finishes licking it and then proceeds to put it back in the freezer. Someone arrest this woman asap.

As expected, Blue Bell responded to the video, and are working with law enforcement, retail partners and social media to track down the woman. Blue Bell released a statement, reading, ?This type of incident will not be tolerated. Food safety is a top priority, and we work hard to provide a safe product and maintain the highest level of confidence from our consumers.?

I will beat your ass in this grocery aisle pic.twitter.com/DoAIDTy9aH

Blue Bell also thanked consumers for alerting their team members about the “food tampering” incident which can lead to felony charges in some states. The company reminds consumers that the ice cream in the containers should freeze to the lid, creating a natural seal. If anyone previously tampered with the lid, it would be noticeable.

I really don’t understand why people do these types of things. What do you gain out of it? Innocent people who love ice cream didn’t pay $5 to get your nasty germs, woman. Go home and do it to your own ice cream. Do you know how unsanitary that is? Plus it’s dumb. By the look of it, this woman is at least 20 but it acting like a 13-year-old. Nah, I bet those 13 years old wouldn’t even do this because they know better. Gross.