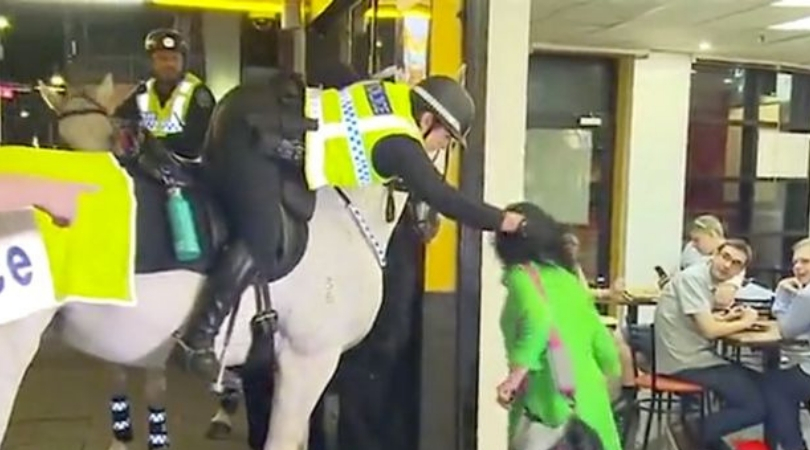 It looks like this woman’s New Year’s Eve celebrations didn’t turn out quite as she had hoped for after she was literally tackled to the ground by police officers! A shocking video posted on social media (which has now gone viral, of course) taken in a pizza parlor in Adelaide Australia, shows a woman punching a police horse while an officer was on top of the horse.

The woman, who is wearing a shockingly green shirt, so there is to way to miss her, is seen throwing a swing at the horse before the officer grabs her by the hair and tries to restrain her next to the horse. But it doesn’t end there! Several diners at the restaurant watched in disbelief as the woman attempted to punch the horse again! What a dumb, dumb.

The officer uses her force to throw her to the ground before another officer nearby grabs a hold of her. Images show the woman lying face down on the pavement as officers twist her arms to detain her. She is then immediately picked up from the floor and moved away from the path of others celebrating the New Year, because nobody wants to see that kind of negativity, of course. After an investigation, South Australian Police stated the intended target of the punch was actually an officer standing alongside the horse who was out of the shot.

Luckily, the woman was not charged following the incident. Which honestly, I am pretty surprised they didn’t do anything to her. Somehow they thought wrestling the woman to the ground was punishment enough. Can you imagine the embarrassment?

The video was posted on Facebook, which received mixed emotions from viewers. Some say they agreed with the officers in how they treated her, believing that someone who hits a police horse should be dealt with as if they hit a human police officer. Others stated the officer was correct in using force, since the horse might have gotten agitated and kicked her in the chest, but the amount of force used was way too excessive. But…I mean, come one! Punching a horse is bad, but wanting to punch a police officer?  Ballsy move.

Apparently, this wasn’t the only arrest Australian police made. There were a total of 114 arrests across the state on New Year’s Eve, and 35 in Sydney, but officers praised revelers for their “good behavior” and the minimal reports of alcohol-related violence.

This article was originally published on January 2,2019.

Watch: A Look Inside How Police Horses Are Trained