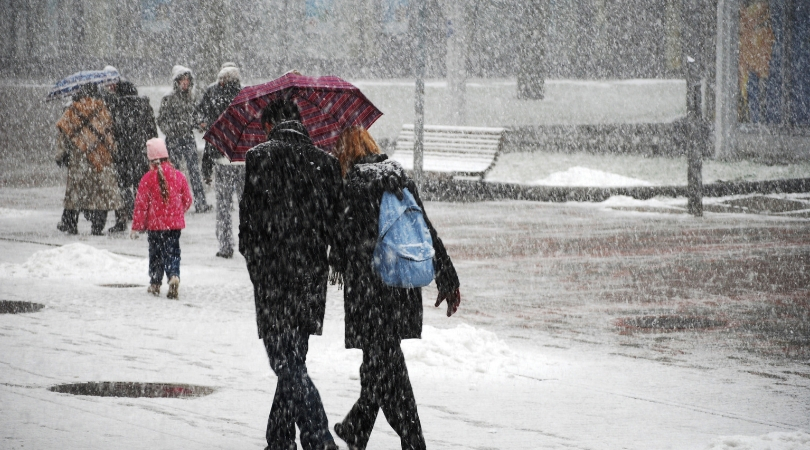 In case you haven’t gone outside today, I’ve got news for you. Sweater weather is officially here, but you might want to cover up with more than a sweater because it is freezing! A “potentially historic” October storm is forecast to hit the North-Central United States through the end of the week. Yes, winter is coming with a vengeance this year!

Record low temperatures, heavy storm winds, and more than 2 feet of snow are expected to hit parts of the West and the Plains. Areas in the Northeast and New England could also experience some strong wind with up to 5 inches of rain. According to the National Weather Service, more than a dozen states are under weather advisories.

Get ready for some weather whiplash in Austin this week…

Parts of Texas, New Mexico, Utah, Arizona, Oklahoma, Kansas, Nebraska, and Iowa are under a freeze warning. Areas in South Dakota, North Dakota, Minnesota, Wyoming are under a winter storm warning, and Kansas, Wisconsin, Missouri, and Illinois are under a freeze watch. So yeah, better stalk up on those jackets now, and avoid the high prices from the whole consumer demand mumbo jumbo.

In North Texas, temperatures are 20 degrees below normal. Official high temperatures occurred just before midnight, sitting in the 50s, expected to last through the weekend. The weather will possibly nudge up in the late afternoon to low 60s, before dropping back to the 50s after sunset. Rain chance will drop from 70 percent in the early morning to 20 percent in the afternoon. Temperature is said to bounce back by Sunday with heights in the 80s.

Blizzard Warnings have now been issued across portions of North Dakota from 10 AM Friday through 1 PM Saturday. Through the entire event, 1-3 FEET of snow will be possible. Winds of 40-60 mph Friday into Saturday will cause whiteout conditions and large drifts. #ndwx pic.twitter.com/Ri8mCXwyu4

AccuWeather forecast expects the snowstorm to evolve into an “all-out blizzard” over the Dakotas, where blizzard warnings were issued this Thursday. The storm is bringing winds of bitterly cold air across the Plains and Midwest. Heavy snow has already begun to fall on the northern and central Rockies, progressing into the Dakota.

In South Dakota after a high near 80 degrees earlier this week, highs were dropped by nearly 40 degrees by Wednesday. Heavy snow began falling early Thursday morning as temperatures dropped in the middle 20s. Portions of South Dakota will have anywhere from 1 to 8 inches of snowfall.

Through Saturday the system is expected to produce historic amounts of 1 to 2 feet of snow in North Dakota. Roads were coverd with snow by Thursday creating slippery driving conditions, and it is predicted “significant travel disruptions, power outages, and impacts to agriculture and livestock.”

In Montana, The Park County Sheriff’s Office stated several accidents have occurred as snow has made its way to the state. The Weather Service in Missouri warned that temperatures will dip into the 30s which will make it feel more like December than October. Wind chill factors are expected to make temperatures feel below freezing.

If you’d like to see how cold your area is going to get, you can always visit the National Weather Service for more information. One this is for sure, it’s time to bundle up!