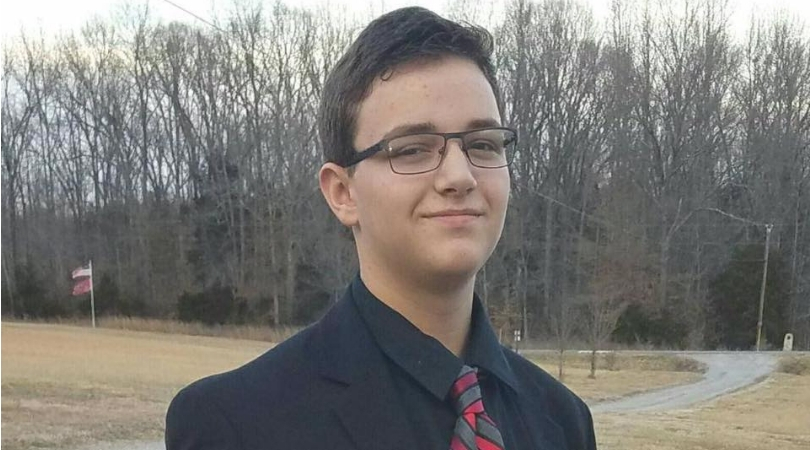 A 16-year-old from Manchester, Tennessee tragically committed suicide after a classmate outdated him online for being bisexual. According to Channing Smith’s family, when he got home from his job around 10 p.m. he went straight to his room. That’s when he learned that one of his classmates had obtained private sexually explicit Facebook messages between him and another boy.

The girl then allegedly posted the screenshot messages to her public Instagram and Snapchat stories. After begging his friends to take it down, he posted on Instagram an hour later that he was taking a break from social media, writing, “I really hate how I can’t trust anyone because those I did were so fake. Bye.”

At 4 in the morning, Channing’s father saw his son’s bedroom light was still on. When he opened the door, he found Channing’s body lying cold to the touch. Authorities believe the High School junior killed himself sometime between 1 and 3 o’clock in the morning.

My heart breaks for Channing, his family, his friends and the community. This is the saddest story. You have to read this. Enough is enough. #JusticeForChanning https://t.co/TT99ULd8I1 https://t.co/tf3s6nGZ49 pic.twitter.com/ooPgAj1LgP

Channing’s family is now seeking justice in the form of legal repercussions, hoping to put an end to cyberbullying. But, according to Channing’s older brother, 38-year-old Joshua Smith, seeking legal help or justice for his brother’s death has not been easy. An investigator under the Coffee County, District Attorney Craig Northcott, stated it was unclear whether the messages between Channing and the other boy were ever posted on social media in the first place.

Through a statement, he noted, “Any report that my office has failed or refused to act is inaccurate and I wanted to clarify this for the sake of the Smith family as they do not need the added burden to the already incomprehensible pain that they are experiencing.”

Smith stated he had already talked to Channing’s friends and girlfriend, who told him he had not told his family he was questioning his sexuality, nor did he believe he wasn’t straight. The high school student’s girlfriend stated he had a secret relationship with the boy he sent the messages to for a least a year, which is why his friends thought he was bisexual. His classmates would also bully him at times for having a “girly voice.” Smith also stated he found the social media posts containing the explicit messages and knew who had posted them. The family wants some sort of criminal charges to be pressed for pushing Channing to end his own life. Social media should never be used for cyberbullying. To have anyone, even as young as a 16-year-old, take his own life is a tragedy that should never be taken lightly. I hope this is a big wake up call for the students at Coffee County High School.

A boy took his own life after being outed as bisexual.

People ask me all the time why I feel it’s important to be openly bi.

It’s because of this. We need to normalize bisexuality. We need to do right by kids who are still figuring themselves out. #JusticeForChanning https://t.co/Vr2XFqtUAK

Channing’s family has organized memorial services for the boy and are spreading awareness of cyberbullying and his story with the hashtag #JusticeForChanning. Channing’s death is one of many that spearhead the fight against cyberbullying and bullying in general. They are also pursuing efforts to put forth legislation called “Channing’s Law,” which would create consequences for cyberbullying. We give our heartfelt condolences to the Smith family and friends.

If you or someone you know is struggling with depression or has had thoughts of harming themselves or taking their own life, you can call The National Suicide Prevention Lifeline (1-800-273-8255) for help and resources.

Editor’s note: This article was originally published on September 9, 2019.