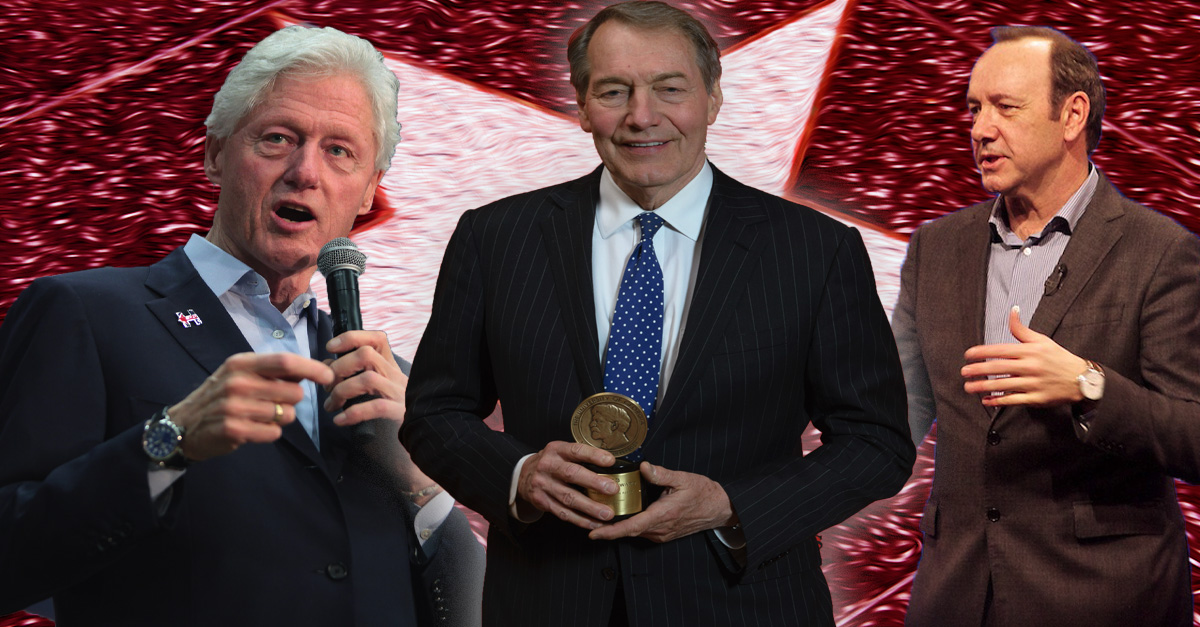 The sexual assault and harassment claims against powerful men are continuing to pile up and one video that’s getting a lot of attention shows Charlie Rose interviewing Kevin Spacey about Bill Clinton. A few years ago, those three names and faces would have been recognizable for various reasons, but today all of them are tainted with the “alleged sexual predator” title. And though the accusations against Bill Clinton are a decade old, the former president is receiving renewed scrutiny as sexual harassment becomes the most-discussed topic in the nation.

The 2015 interview begins with Charlie Rose asking Kevin Spacey “let’s just talk about your bromance with Bill Clinton — can we talk about that?”

RARE OPINION: Liberals shouldn’t be shocked by the defenses of Roy Moore, because it’s how they defended Bill Clinton

The actor claims “I never waited to see which way the wind was going to blow, with respect to [Clinton], I was always there. And I was a true friend and never doubted him, never stopped believing him — took him as he was.” Spacey tells Rose that he’s not as close to Hillary Clinton, saying “I just haven’t spent as much time with her.”

A few months ago, Spacey was at the peak of his career, starring in the hit Netflix show “House of Cards” where he portrayed a cunning politician. But in the end of October, a string of men came forward to accuse Spacey of sexually harassing them. One man even claimed that he was 14 years old when he carried on a relationship with the then 24-year-old actor — he says that relationship ended when Spacey tried to rape him.

As a young black woman starting out as a producer for the prestigious Charlie Rose show, I had to gauge every day whether to respond to casual racism or sexually predatory behavior.

Since the accusations against him became public, Spacey has been fired from his Netflix show and has entered treatment, according to his publicist.

The allegations against Charlie Rose were equally as damning as a group of women claimed that he constantly made sexual advances on them, appeared naked before them and made lewd phone calls late at night. The reporter apologized but was fired from CBS soon after the news broke. Rose’s former co-host on “CBS This Morning,” 62-year-old Gayle King offered him no quarter, telling viewers “Charlie does not get a pass here. He does not get a pass from anyone in this room. We are all deeply affected; we are all rocked by this.”

My statement in full. pic.twitter.com/3kvFrqF2dT

As sexual assault and harassment claims against powerful men have continued to pile up, the nation is beginning to take a second look at former President Bill Clinton. While former DNC Chair Donna Brazile said that she thinks Clinton should campaign for Democrats during the 2018 midterm elections, there are plenty of people calling for his head. The Atlantic declared that “feminists were on the wrong side of history” with Clinton and asked “is it finally time to make things right?” Mika Brzezinski put it even more bluntly, addressing the former president on air, she said “You, the politician, and your wife, the politician, need to not talk about these issues. Just don’t, unless you want to come to the table with some honesty.”