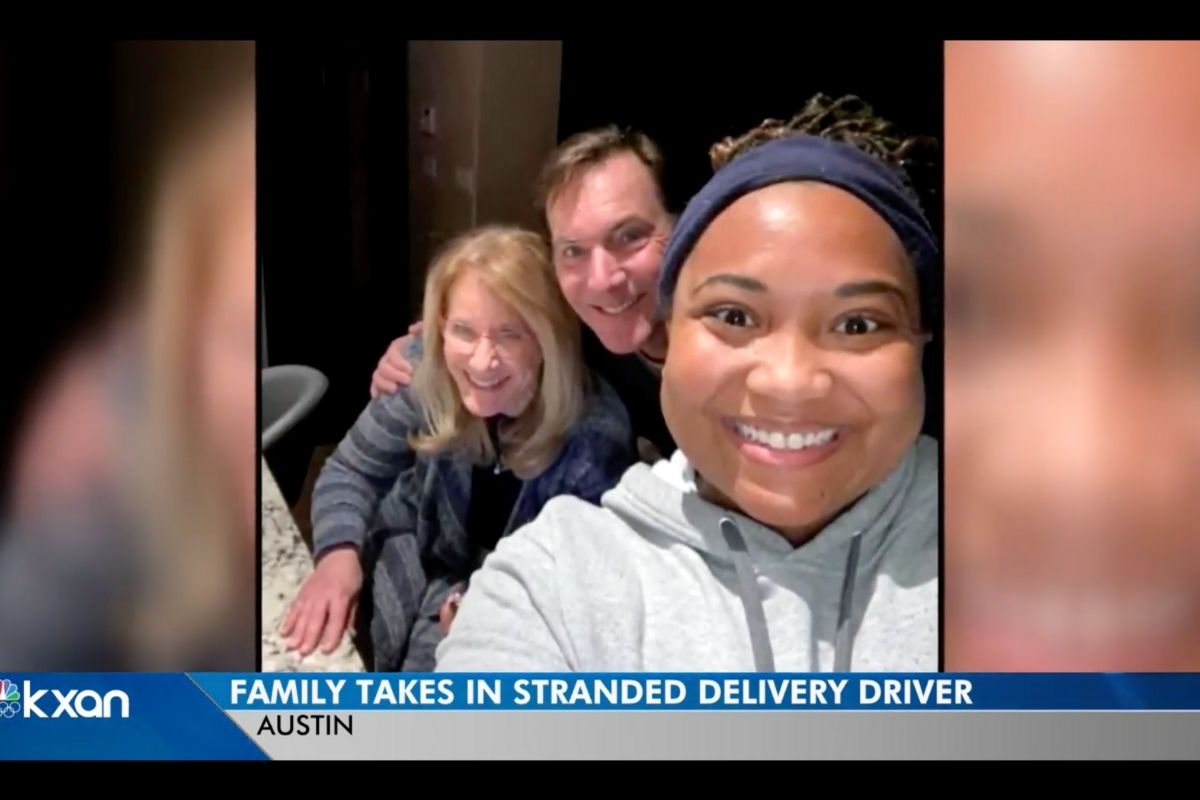 Throughout the Coronavirus pandemic, it’s the delivery drivers who’ve really saved society. They’ve masked up, and more recently bundled up, to keep on bringing those take-out burritos, prescription medications, Amazon Prime orders, and just about every other item that’s kept us comfortable throughout the difficult year. Now, out of Texas, a food delivery driver is the subject of a heartwarming story that already sounds so 2021.

As the winter storm in Texas has wiped out power grids and threatened lives, locals are finding unique ways to stick it out. Unlike Senator Ted Cruz, who jetted off from Houston to Cancun, many Texans are boiling snow for water amidst widespread blackouts. In Austin, one couple has even opened their home to a stranded delivery driver.

Chelsea Timmons, a driver for Favor Delivery, was completing her final work stop on Sunday evening when the icy road conditions began to worsen faster than expected. As she pulled up to the home off of Nina Richardson and Doug Condon, her car slipped down their inclined driveway crashing into a flower bed. Although the damage was not too bad, Timmons’ car was stuck. She and Richardson and Condon then tried paving the driveway with epsom salt, and even bird seed, to no avail. Calling AAA was also a bust, as all tow trucks had been re-routed to serious emergencies.

As Doug Condon told KXAN: “At some point we realized that we’re probably gonna have a houseguest for a few days, which was fine.” As of yesterday, Chelsea Timmons had spent the last five nights in the couple’s guest bedroom, which — lucky for her — has its own bathroom and television. The dogs even sleeps in bed with her! Timmons and her hosts also come together for daily meals, so it’s a good thing she’d made it in time with all those groceries.

“I Worked as a Food Delivery Driver During COVID-19”

When Chelsea Timmons described her experience as a houseguest, it sounds like Doug Condon and Nina Richardson are like caring relatives. “They have not only helped me through the base of the storm, but since I haven’t been able to make it back home they pretty much won’t let me go,” she said. Every time that she suggests leaving the guest room set-up, she’s questioned about what she will eat at home and whether she can safely make it there.

As for eventually sending their new friend on her way, the generous hosts say they are waiting till conditions improve. But when that happens, Chelsea Timmons will be leaving “With a bottle of water, sandwiches and some blankets just in case.”