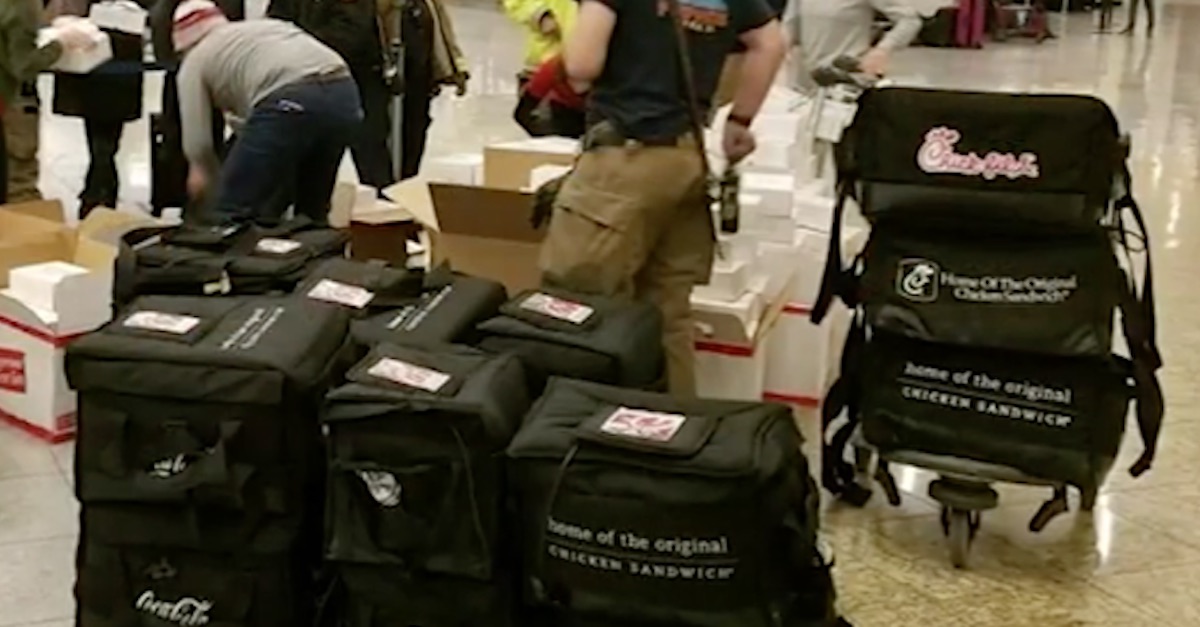 Anyone who knows anything about Chick-fil-A knows that their doors are closed on Sundays, but the power outage situation at Hartsfield-Jackson Atlanta International Airport was bad enough that the chicken business decided to act.

But Chick-fil-A arrived on scene to provide a little light in the airport-wide darkness.

Chick-fil-A said in a statement that Atlanta Mayor Kasim Reed asked for help around 10 p.m. and they provided it.

“The mayor called about 10pm and asked for assistance. We immediately mobilized staff and team members who live and work near the airport, and they are making sandwiches and delivering them to the EOC (emergency operations center),” the company said. “City and airport officials there are distributing sandwiches to passengers who are stranded due to the power outage.”

“It has been a very difficult day for thousands of travelers, and while Chick-fil-A is always closed on Sunday, our restaurants open occasionally to serve communities in need. We do not make a profit, but do what we can to offer comfort to people experiencing hardship,” they added.

WSB-TV reported that 2,000 meals were handed out in all.

People on social media definitely noticed that Chick-fil-A was working on Sunday, some going so far as to say “Chick-fil-A is sent from heaven.”

All you have to do to get Chick-fil-A on a Sunday is cut the power to the world's busiest airport. https://t.co/kweu65Xfh7

CHICK-FIL-A IS OPENING ON SUNDAY THIS IS LIKE NATIONAL EMERGENCY LEVEL SHIT https://t.co/kf3wVRd97e

The City of Atlanta has mobilized the Georgia International Convention Center and will provide shuttle services for anyone who needs a place to stay for the night. @ChickfilA will provide food for passengers.

LIGHTS ON and delivering food and water to our passengers! Thank you @dancathy with @ChickfilA for opening on a SUNDAY! #ChristmasMiracle pic.twitter.com/0PlSxHIWj5

Shoutout to @ChickfilA for feeding everyone who's stuck at the #ATLairport.

Also shoutout to everyone at the ATL airport who will now be able to say they were served fresh Chick-fil-A on a Sunday.