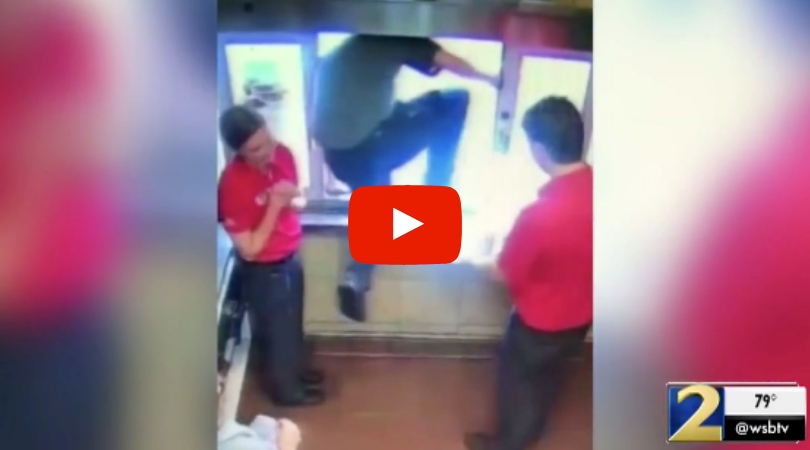 It’s no secret that Chick-fil-a employees are angels sent from the heavens above. Think about it, they always make sure you’re satisfied, give you extra sauce without charging, and always asks you how you’re doing as soon as you see them. So, when a Chick-fil-a employee saw a 6-year-old choking, you sure know he went and used his superb customer service powers to save him.

Logan Simmons is being recognized as a hero after quickly switching from fast food to fast thinking, by literally jumping out of the drive-thru window and into a customer’s car. Simmons overheard a panicking mother yelled that her son’s seatbelt was choking him and saw the boy was turning blue. So naturally, he sprang into action and pulled out his pocket knife to cut the child free. The best part about this whole incident is that it was all captured on the fast food restaurants surveillance video!

A young @ChickfilA worker jumped into action when a boy was choking in a car. https://t.co/iFN0IUDyvH TONIGHT AT 11: What the teen told @JustinWilfonWSB about the terrifying moments. pic.twitter.com/KKTlljgW72

After hours of saving her son, the mother, Terri Simmons, called to thank him for saving her son’s life and especially for thinking quickly on his toes despite him not knowing the child. I say you give this employee a bonus, free Chick-fil-a for life, and a key to the city. It just goes to show you how good these employees are trained.

Not surprisingly enough, this is the third time a Chick-fil-A worker is thanked for their heroic actions. Last summer an Austin, Texas, Chick-fil-A employee, Anita Duran, was praised for saving a customer from choking on the food inside the restaurant and performed the Heimlich maneuver to an elderly man. Earlier that year, another Chick-fil-A employee in Highland Ranch, Colorado, Andrew Myrant, was caught on security cameras also saving a life, but this time of a coworker who was choking on a meal during his lunch break.

See, I told you. They are angels, indeed. Go thank your local Chick-fil-a and get yourself a delicious chicken sandwich and nuggets while you’re at it! You never know when they can save your life.

This article was originally published on June 28, 2019.

Watch: The Five Guys Secret Menu Is a Gut-Bustin’ Delight