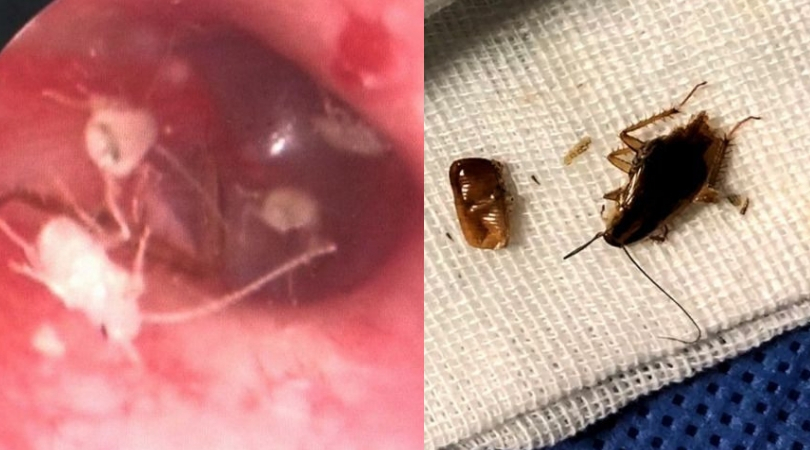 Ew, ew, ew. Nope, this is going to be a big fat no from me. Imagine your worst nightmare coming true? That nightmare just happens to include cockroaches taking over your body.

This is exactly what happened to this poor innocent man from south China. 24-year-old Mr. LV reportedly woke up with sharp pain inside of his ear and had a feeling like something was “scratching” inside his eardrum So, he asked his family to grab a flashlight and check inside because he couldn’t take the sensation anymore, probably thinking it was just earwax. That’s when they found the skin-crawling and disgusting discovery.

According to Dr. Zhong Yijin, the man said he was in a lot of discomfort and felt like something was crawling inside. The Sanhe Hospital specialist said it caused him enough discomfort to not let him sleep at night. When he looked inside Lv’s right ear canal, the doctor found more tho 10 COCKROACH BABIES INSIDE HIS EAR. Yes, 10!!!! It was a whole freaking family of cockroaches just feasting in there. How insane is that?

The doctor then noted that the babies were running around as if they were out in a playground, just trying to get out of the man. When he began to remove the babies with a pair of tweezer, he was able to find the “much larger mother roach” and was removed.

If you hear a scratching noise in your ear canal, it may be nothing, or it may be…..https://t.co/aScUYWsfGs

After the removal, he prescribed an ointment and blamed the whole situation on LV’s habit of leaving unfinished food packets near his bed. He stated, ?Household hygiene helps to prevent the appearance and spread of cockroaches. Disinfect drains and sewers. Use mosquito nets and screens on windows. That?ll stop insects from flying or crawling into your nose and ears.?

It’s not exactly sure how long these gross tiny insects had been living inside the man’s ear, but last year a woman in Florida stated she had been living with large cockroaches in there for a full nine days! Yikes, yikes, yikes. Just the thought of cockroaches ( on the sidewalk, scares me to death! Imagine a family of cockroaches living INSIDE OF YOU. Yeah, no…a true nightmare. Be right back, heading to an ENT specialist.