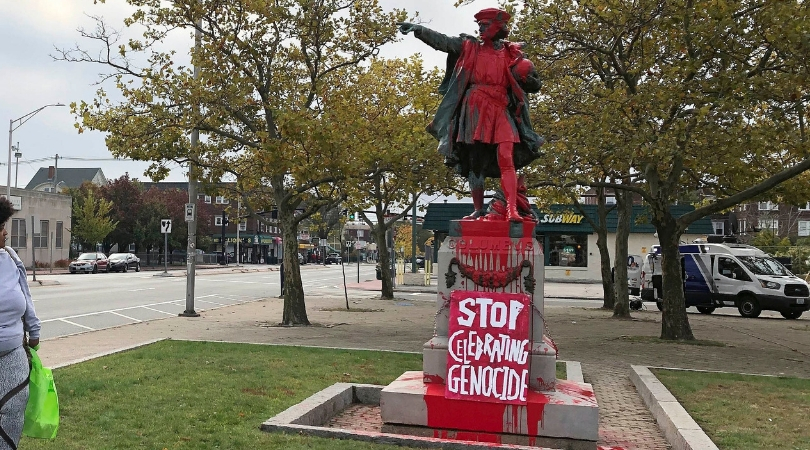 Statues of Christopher Columbus have been vandalized on the U.S. holiday commemorating the explorer’s arrival in the Americas back in 1492. The statue located in Providence, Rhode Island was splashed with bright red paint, with a sign reading ?stop celebrating genocide? leaning against the pedestal.

The word ?genocide? was written in orange paint on the rear of the pedestal. This isn?t the first time the statue has been the target of vandalism on Columbus Day. Dedicated in 1893, The New World Explorer has since become a polarizing figure most recently vandalized in 2017.

In San Francisco, several city workers scrubbed away the pain and removed graffiti on a statue of Columbus, reading, ?Destroy all monuments of genocide and kill all colonizers.? The statue is near the Coit Tower, which is a popular tourist spot and was said to be full of people there on Sunday to watch the Blue Angels perform.

The San Francisco Police Department believes it is likely no coincidence that the statue was defaced on Columbus Day weekend. San Francisco is one of the several cities that observes Indigenous People’s Day instead of Columbus Day. The holiday was being celebrated just a few blocks away from the statue.

Red paint covered the face of the controversial colonist, while the base of the statue had graffiti that read "Destroy all monuments of genocide and kill all colonizers."@abc7newsbayarea pic.twitter.com/GyDEeMfeu9

Several Native American advocates have urged states to change Columbus Day to Indigenous Peoples Day over heavy concerns that Columbus spurred centuries of genocide against indigenous populations in the Americas. Authorities from each state are currently investigating both separate acts of vandalism.