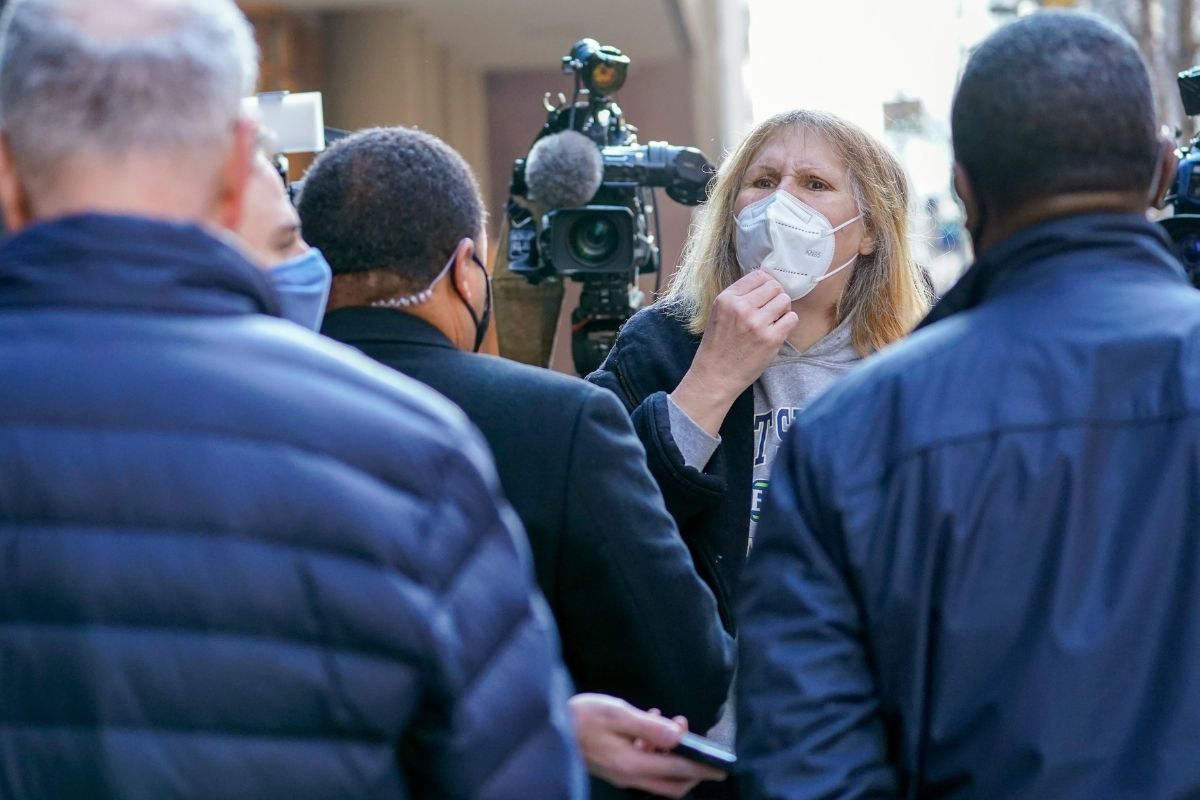 A heckler interrupted Senate Minority Leader Chuck Schumer’s Manhattan press conference on Tuesday and compared the Jewish Pol to “Adolf Hitler” before vowing to show up at his and Speaker Nancy Pelosi’s home. Schumer (D-NY) was wrapping up a plea to the TSA in order to add the US Capitol rioters to the no-fly list. That’s when a woman wearing a mask stepped in front of the podium and hurled several disturbing insults at the lawmaker. The riots were caused after President Donald Trump addressed his supporters, vowing to “never to concede” the presidential elections against president-elect Joe Biden. The crowd of supporters quickly made their way into the building outside of Senate chambers.

The women started off by saying that she was glad to see the attack against the US Capitol, stating, “You racist socialists can dish it out but you can’t take it and remember this, Adolf Hitler was a socialist and that’s exactly who you follow, you’re nothing but a coward!” The heckler, later identified as Lee Ward, stated, “Seeing you hide underneath your desk, I actually got sexually excited over it, that’s how much I loathe you, that’s how much I’m glad what they did.”

She continued, “As long as there’s outbreak and unrest in our hearts, there’s going to be unrest in these streets.” She went on to ask that where in the First Amendment did it say that one has to protest politely and peacefully.  Ward then began to launch several attacks at Schumer, demanding to know whether he had actually told the US Capitol Police to stand down during the riot.

She stated that she wasn’t the only one to believe her previous statement. She yelled, “trust me, if you do this to 75 million Americans, try to put us in jail, you’re going to have to hire 175 million to guard us.” As Ward continue to shout what she believed was right, Schumer was captured on the news outlets asking if they could remove her. A man at the press conference tried to ask her to leave, but she quickly looked at him calling him a “cracker” while telling other people in the crowd to “shut the fu** up.”

Security Guards tried to gently grab her as she yelled for them to get her hands off her., yelling “six feet,” respecting the COVID-19 social distancing rules. That’s when she stated, “I’m a transsexual and I’m a gypsy, which makes me a minority of color, don’t do it, it’s not going to look good for you Schumer.” The woman quickly moved off-camera allowing Schumer to continue the press conference while taking questions from reporters. But, the typically long-winded Pol rushed through them and then quickly ended the event as a woman continued to shout in the background.