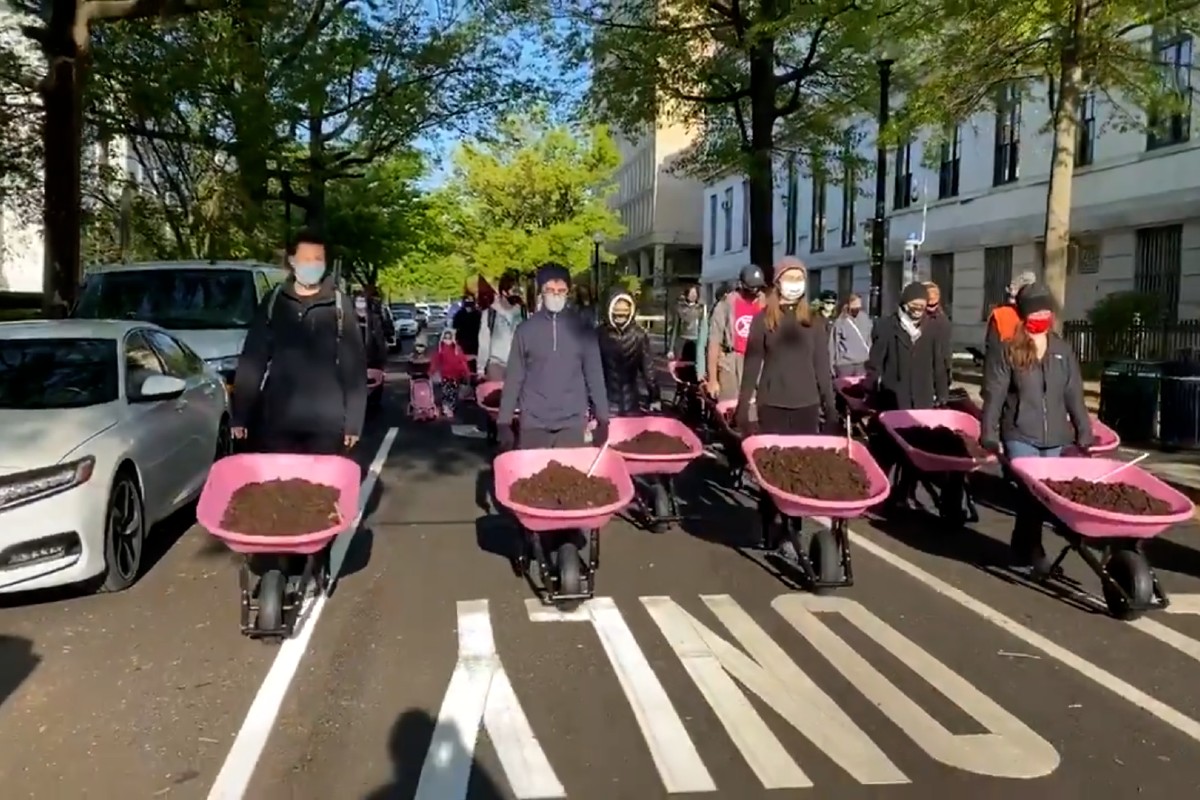 feeling bad for the probably poc workers who are gonna have to clean up their performative activism up https://t.co/Jqo1YstjiL

The Thursday morning protest, which coincided with Earth Day, was led by activists with Extinction Rebellion DC. Extinction Rebellion is an international environmental movement dedicated to using nonviolent civil disobedience to urge governments to take action on the global climate crisis.

The demonstration included at least a dozen environmentalists, who pushed pink wheelbarrows of steaming manure which they unloaded in a big pile on a street by Lafayette Square, reports Jane Recker from The Washingtonian.

On top of the hill of poop, demonstrators stuck a sign reading “Stop the Bullsh-t”. Other banners read, “Declare a climate emergency now!” and “Biden’s 2030 plan = mass death”.

The demonstration came on the heels of President Biden’s two-day virtual climate summit of more than 40 world leaders. By hosting the event, Biden endeavored to reestablish the U.S. as a leader in global efforts on climate change after then-President Donald Trump pulled out of the Paris accord. During the summit, Biden promised that the U.S. would reduce greenhouse gas emissions by 52 percent by 2035 and reach net-zero emissions by 2050.

According to spokesperson Reilly Polka, Extinction Rebellion DC feels the president’s plan doesn’t go far enough. XRDC is calling for the president to set his net-zero deadline for 2025. “We’ve elected another president who can’t understand basic science,” Reilly Polka told The Washingtonian. “Just like rearranging deck chairs on the Titanic, Biden is fiddling with dates and targets as the ocean rises and the world burns. The president has failed to address the immense scale of the planetary emergency. Those traveling first class are still enjoying the party too much to hear the cries of those already drowning in the decks below.”

After dumping out a dozen wheelbarrows of manure on the street, protesters said they would “clean up their sh*t”. But in the end, it was largely BIOPIC, low-wage workers of DC Public Works who ended up cleaning up the mess, which had begun to block traffic.

“Rebels returned with shovels to clean up, which was the plan, but the city had already begun,” a spokesperson for XRDC told The Washingtonian. “It’s unfortunate that the city had to clean our mess, but that’s exactly what Biden is asking humanity to do with his 2030 plan — he’s making it everyone else’s problem. We thank the city for their services this morning.” Their failure to clean up their mess did not go unnoticed on Twitter, where Democrat and Republican users alike scorned the protest.

Protests at The White House

The privilege of dumping shit on the street knowing that somebody who makes less than you is going to have to clean it up. 👏👏👏👏 bravo you spoiled pampered assholes

Gallons of paint to color the wheelbarrows, gallons of gas used to transport it all, more gas used to get cleaning crews out there, cars now stuck in traffic wasting fuel, and if any of that shit gets washed away it ends up in the city's water.

Some "environmentalists" they are. https://t.co/uc2Jp4L4U5

By buying manure, they have now incentivized the creation of more carbon emissions https://t.co/SOr3OmOTR2