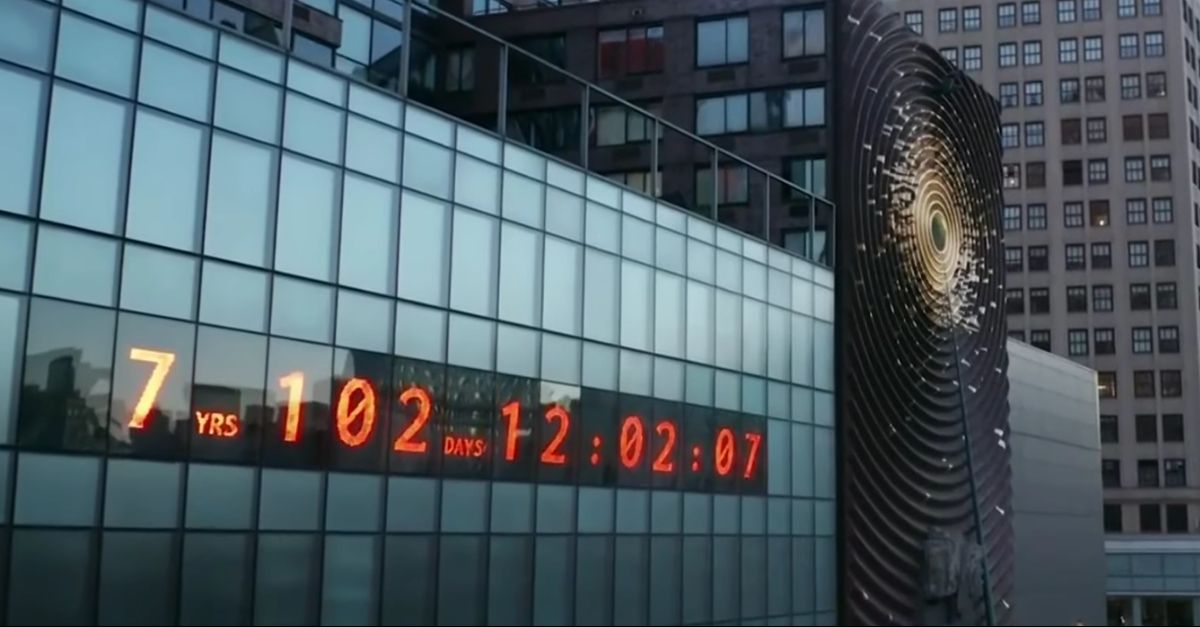 As if there wasn’t a more appropriate time to highlight an iconic landmark, New York has given tourists and its residents yet another relevant monument worth seeing during these specific times. The Metronome is a large art installation located at the southern end of Union Square in New York City, and before, it was just a huge circle-heavy piece with a metronome needle known as “the Infinity” and “the Source,” along with a digital clock right next to it called “the Passage.”

Originally created by artists Kristin Jones and Andrew Ginzel, the numbers on the left side of the digital clock used to show the current time throughout the day while the numbers on the right side would show how many hours left were in the day. But now, thanks to two climate activists, Andrew Boyd and Gan Golan, “the Passage” now shows a different set of numbers across its LED platform. On Saturday afternoon, after two years, “the Passage” is currently known as the climate clock because it now shows the countdown of how much time the Earth has left to curb greenhouse gas emissions in order to have a two-thirds chance of staying below 1.5 degrees Celsius.

And as if there wasn’t a louder way of screaming that climate change is real, the climate clock is so detailed, it counts the years, days, hours, minutes, and seconds until global warming has seriously damaged the Earth and its inhabitants, compared to pre-industrial levels. According to CBS News, this was the goal of the International Paris Climate Agreement.

According to the clock, we have just a little over seven years left before the consequences start to become pretty real and irreversible. Boyd says, “You can’t negotiate with reality. You can’t negotiate with science. Scientists are telling us that the next seven years are crucial to the fate of the Earth and to humanity.” And if the Earth wants at least a 50% chance of not going over 1.5 degrees Celsius of warming, the U.N.’s Intergovernmental Panel on Climate Change (IPCC) says that greenhouse gas emissions caused by humans must be reduced by 45% from 2010 levels by 2030, meaning with smaller chances we can add a couple more years.

Boyd and Golan just hope that the countdown clock will serve as a constant reminder that climate change is very real and that climate disasters will happen if climate actions are not taken seriously. Golan says, “Our hope is for this clock to be a beacon to galvanize climate action,” and the pair would like to erect more climate clocks in other countries outside of the United States.

Golan explained, “We believe that having these monumental clocks visible in public squares across the world, and smaller ones in universities and classrooms and corporate lobbies, all showing the same number, can get us all on the same page. We need for everyone in the world to ‘synchronize our watches’.”

The idea was inspired by the young climate activist, 17-year-old Greta Thunberg, who had as the United States to build the first climate clock. She wanted to carry it to the United Nations to show the Secretary-General so that the doomsday clock could sway him to “listen to the scientists.” Her clock had the same countdown like the one in Union Square, but it also had another number on the right called the lifeline, which showed the percent of the world’s energy being generated from renewable energy that does not emit heat-trapping greenhouse gases. It was to help encourage the opportunity to turn the deadline, “into a lifeline.”

Who knew it could make such a big difference to change looking at the time of day to look at the time remaining. It’s haunting to see a digital display as the deadline reaches the point of no return when it comes to global temperatures. Boyd is the Chief Existential Officer of ClimateClock.world and it’s worth looking through to learn more about the climate crisis.

Watch: Schools Getting Rid of Analog Clocks Because Teenagers Can?t Read Them