CNN panel torpedoes into travel ban chaos: “I never want to be on the show with this bigot again” 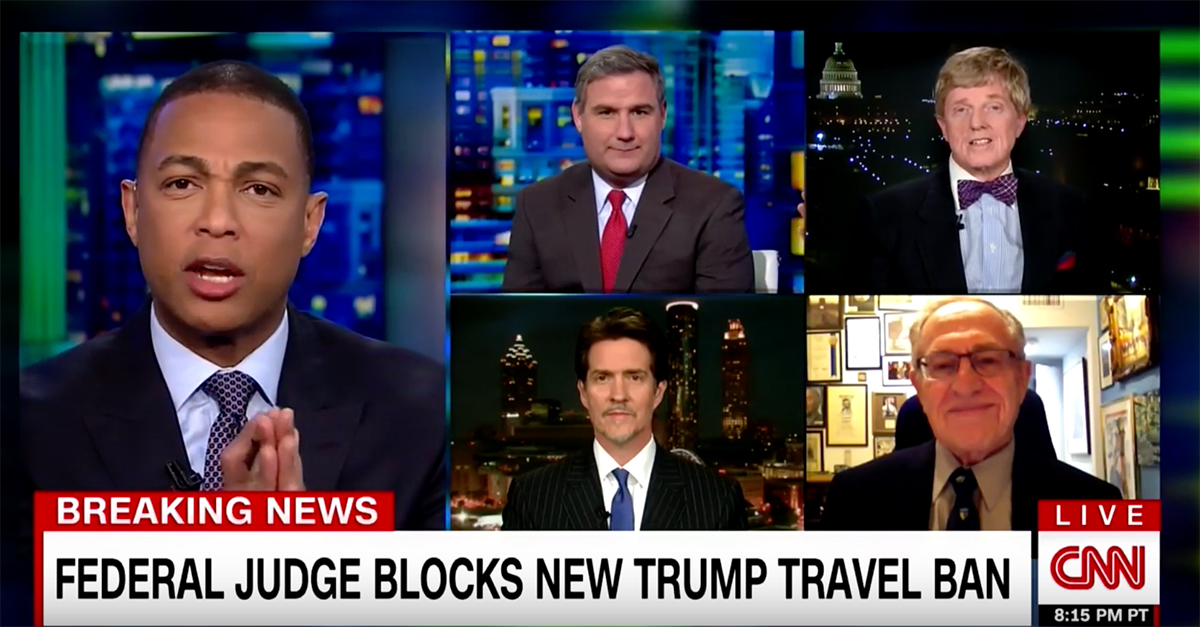 Earlier that night, a federal judge blocked the ban, which this time was aimed at six majority-Muslim countries instead of seven. Iraq was left out of the new ban.

The show quickly saw its wheels shoot off as Flannery and Harvard Law School’s Dershowitz got into it, with Flannery suggesting Dershowitz approves of Trump’s latest Muslim ban because, he said, Dershowitz hopes “that this may secure Israel.”

Dershowitz interrupted: “What are you talking about?”

Flannery answered: “I think it’s a powerful argument that we’ve established religion in this fashion through this ban that is transparently against Muslims.”

Dershowitz said he never mentioned Israel in regard to the discussion on the ban and sharply replied: “You’re lying through your teeth. I never said a word about Israel. When you focus on everything I say about Israel it really raises questions about your own bigotry and biases, so let’s get to the point and just keep your mouth shut.”

Flannery interrupted: “I think that’s what you believe. You said the court was bias.”

Dershowitz explained that he believes the ban is not unconstitutional, although he argued that he does not believe it makes for good policy. And he also wasn’t done laying into Flannery.

“Don’t confuse constitutionality with bad policy. I don’t like this policy. I don’t like this order. But I am a constitutional analyst and I know the establishment clause cases and I know the cases that relate to national origin,” Dershowitz said. “And I’m telling you that I believe that this presents a very tough case for the Supreme Court because it’s the first case in which the Supreme Court has been asked to take into account what a political figure said while running for office and use that to interpret the words of his statute.”

Dershowitz continued: “What does this have to do with Israel? Why in your bigoted background do you have to bring in Israel to attack me? Your bigotry is showing.”

Flannery responded: “I believe that’s the reason you’re taking the position you are.”

It led Dershowitz to one final outburst before Lemon had to extinguish the fireworks and move on.

“You can’t believe anything I say because I’m a Jew and a Zionist?” Dershowitz said. “For shame on you, sir. I never want to be on the show with this bigot again!”