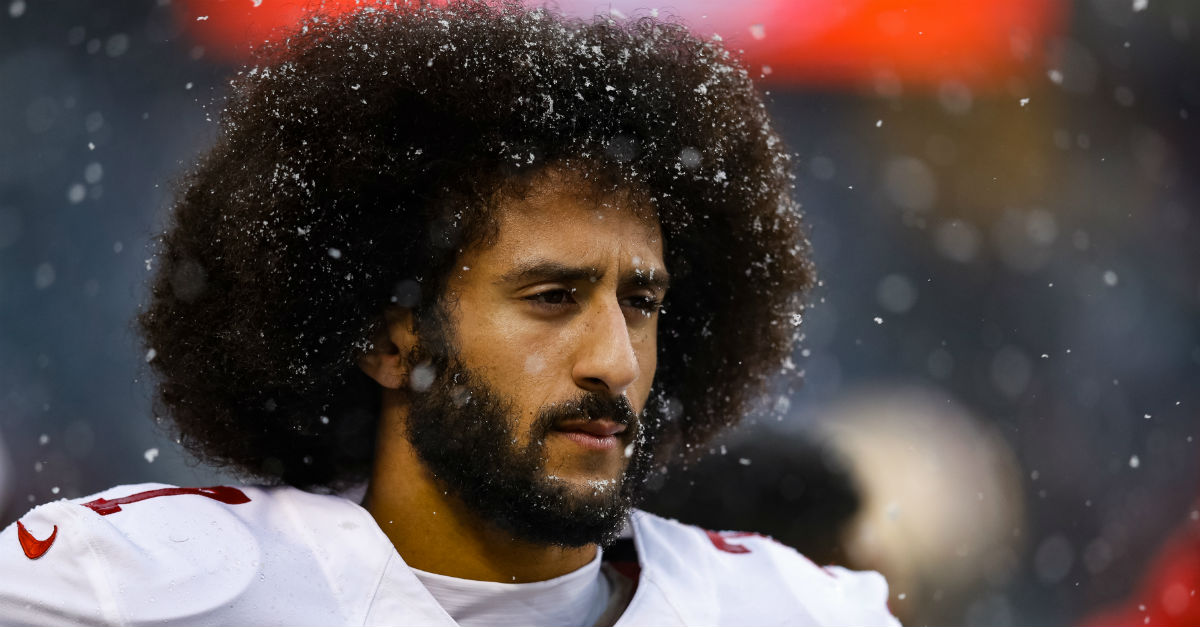 Colin Kaepernick appeared at the Alcatraz Indigenous People’s Sunrise Gathering on Thursday where he spoke in solidarity with the Native Americans on the island.

The quarterback participated in the event that has become known as “Unthanksgiving Day,” which commemorates the 1969-71 occupation of the island by 89 Native American activists. The activists stayed on the island for 19 months with the demands that it be turned into an American Indian school, The San Francisco Chronicle reports.

While at the ceremony, Kaepernick gave a brief speech and uploaded a video of his remarks to Twitter. He declared:

I realize that our fight is the same fight. We’re all fighting for our justice, for our freedom, and realizing that we’re in this fight together makes it all the more powerful.

The event begins just before dawn when a group of Native Americans visit the island for the sunrise ceremony. Michael Horse, an Native American actor known for his role in the popular show “Twin Peaks” told Newsweek “It’s about reflecting, remembering and celebrating that we are still here and our culture still survives. It’s a wonderful way for native people to anti-celebrate the day.”

Today, I was on Alcatraz Island at the Indigenous People’s Sunrise Gathering, in solidarity with those celebrating their culture and paying respects to those that participated in the 19 month occupation of Alcatraz in an effort to force 🇺🇸 to honor the Treaty of Fort Laramie. pic.twitter.com/KdNtY3dp72

Kaepernick is still an unsigned free agent, a situation that many attribute to his national anthem protests. FiveThirtyEight analyzed the former 49er’s statistics in the season before he left the NFL and concluded that, based solely on the merits of his play, it’s very unusual that the Super Bowl Champion is still unsigned. There aren’t many qualified quarterbacks in the modern era who have gone as long as Kaepernick without a contract and the only one who has gone longer is Michael Vick.

Nevertheless, Kaepernick has continued his fight for racial equality — a fight that landed him on the front cover of GQ Magazine after the publication named him its “Citizen of the Year.” Former Baltimore Ravens star Ray Lewis claims that his team was working on getting the quarterback signed until his girlfriend posted a tweet bashing Lewis. The former linebacker recalled “His girl goes out and puts out this racist [tweet] and doesn’t know we are in the back office about to try to get this guy signed.”

The NFL has decided that it will not force players to stand for the playing of our National Anthem. Total disrespect for our great country!

In the current political climate that has overtaken the NFL, there’s a pretty good chance that Kaepernick will never take a snap again. As more players have begun taking a knee during in the national anthem, President Trump has waded into the battle, firing off early-morning tweets attacking the athletes — he’s sent out over 20 tweets criticizing the league and its players. Now, the NFL owners are considering keeping athletes in the locker room in hopes of curbing the backlash that has ensued in the wake of the national anthem protests.