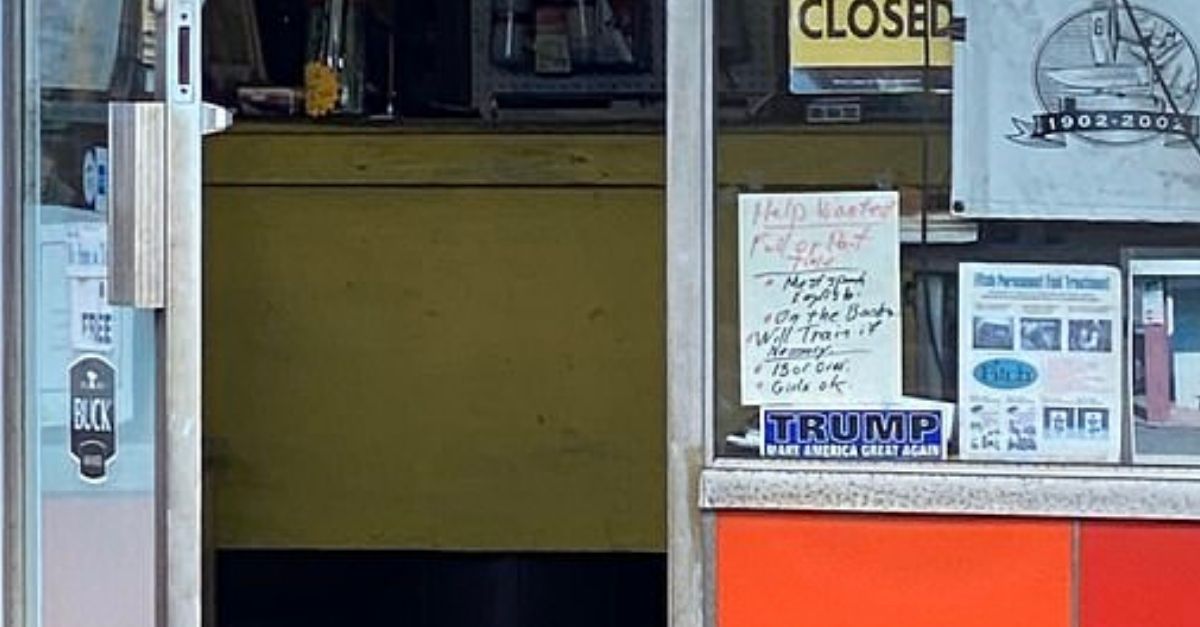 A New Jersey’s business is now on fire after a sign was posted on their front window reading ‘Speak English or pay $10 extra.’ The sign was posted by a business owner in Clifton and has now sparked outrage with some calling the message racist. Dave Feinberg has been sharpening knives at his business, Cutters Edge, in New Jersey since 1975 and remained as the city’s demographic shifted for 50 years. But for customers, the note posted on the window is deeper than his talented craft.

For over 2 weeks now, the New Jersey business has been receiving numerous phone calls by angry customers demanding that local officials close down the store. Social media and Twitter users have also attacked the store, calling them racist, begging people to boycott it. One Twitter user, “@iamfarias” stated, “CUTTERS EDGE CLIFTON NJ CHARGING PEOPLE $10 EXTRA IF YOU DON?T SPEAK ENGLISH! SHUT THEM DOWN FOR BEING RACIST PIECES OF ****! RACISM IS NOT WELCOMED IN NJ! The shop was even attacked on Yelp after customers ripped on the shop by giving them a negative one-star rating, asking people to “ignore the establishment.”

71-year-old Owner Dave Feinberg had reportedly put the sign up recently after a frustrating 10-minute encounter with a customer. He stated, ?I couldn?t understand a word he was speaking in Spanish ? He made absolutely no attempt, none whatsoever, to speak to me in English. I figured $10 at 10 minutes was a fair number.?

The shop owner had initially thought it wasn?t a problem as people came in and started ?laughing and giggling,? until the phone calls began blocking his phone line and they started getting angry voicemails. After several members began to criticize the knife shop and started speaking negatively about him, Feinberg put up a new sign that shows his apology. It read, ?Sorry about the speak English sign. Please [accept] our [heart] felt sadness it may have caused.?

The 71-year-old owner did want the public to know that he apologizes for any ?misunderstanding? and wants them to know that he is not racist. He also noted that he gets along with his new Arabic and Latino neighbors. He spoke with the New York Daily News, saying he was surprised by the swift criticism after he wrote the sign, he stated, “I guess the frustration factor got to me, but it had nothing to do with speaking English or Spanish or any other language,? he told the publication. It was about when we?re here, we are able to understand each other.?

According to Clifton Council Member Rosemary Pino, the sign was at odds with the town, since it prides itself on its diversity, saying people from the city speak different languages. She stated, ?Messages like this put us back centuries.?