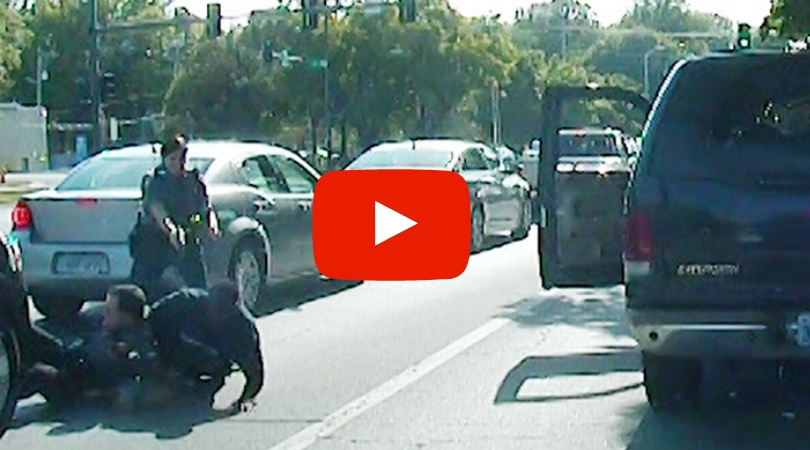 A Kansas police officer was suspended for accidentally shooting a man during a regular traffic stop, after reaching for her taser but grabbing her handgun instead. Dashcam video from the patrol vehicle of Officer Ian McCann, who conducted the traffic stop, shows him having a discussion with 35-year-old Akrisa Lewis. Lewis was initially stopped by the Lawrence police officer in May 2018 for not wearing a seatbelt.

Attempting to get the man out of the vehicle, McCann called for backup, warning Lewis he would be arrested if he did not cooperate. McCann is heard saying, “You’re about to go to jail on a seat belt violation, are you really wanting to do that? You could give me your driver’s license, I could write you a ticket and you can drive home.”

Lewis then tells the officer that he was pulled over because he is a ‘black man’ and insists on seeing a supervisor. When he refuses to provide his ID or proof of insurance, he continues arguing, which is when backup officer, Brindley Blood, was called.

Both officers try to get Lewis out of the vehicle by force, finally tackling him to the ground. Blood is then seen rushing to McCann after Lewis is resisting arrest, reaching for a weapon on her belt. You can there hear a shotgun, and Blood quickly taking a step back repeating, “I shot him.”

Blood, who resigned from the police force in January 2019 after being placed on paid leave, was charged with reckless aggravated battery. Lewis was treated at the hospital and is charged with several misdemeanors including battery against a law enforcing officer.

According to the affidavit, Blood states she didn’t realize she had shot Lewis until she looked for the taser wires to see if they hit their mark. She quickly realized there weren’t any and admitted she indeed had shot him by accident. The city had initially denied requests for the video to come out but was later released after it played in Douglas County District Court during a hearing for Blood.

Attorneys for the law enforcement officer argue that while she made a mistake, she was not reckless in any way, as the charge alleges, and that the case against her should be dropped. She is scheduled to appear in court later this week.

This article was originally published on March 26, 2019.