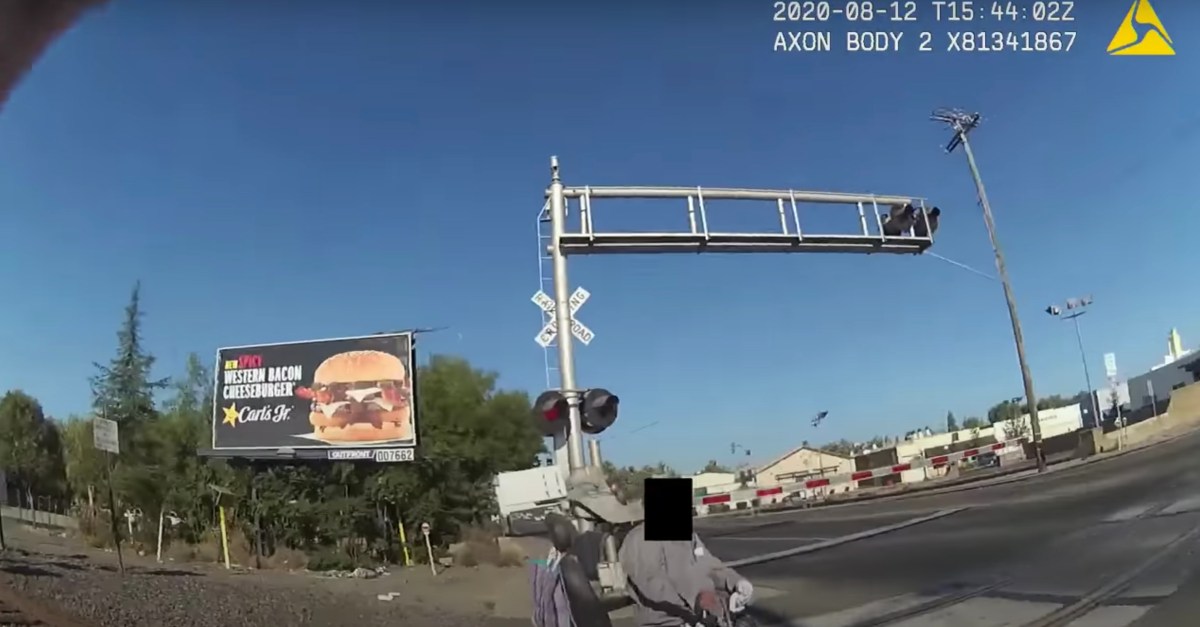 A police officer from Lodi, California is being hailed as a hero after bodycam footage of her saving a man in a wheelchair from being killed by a speeding train at the last possible second was released.

The northern California police officer, Erica Urrea, pulled up to train tracks on Lodi Avenue in her patrol car with quite literally not a second to spare. The bodycam footage shows her running up to the intersection where the tracks meet the road. Stuck right there in the middle of the tracks, as the train warning bells dinged and the train’s whistle bellowed a final warning to move, was a man in a wheelchair, unable to get his chair unstuck or to get out of it.

Finally, Officer Urrea pulls the man out of the chair just — JUST — as the massive locomotive slams into it.

The footage is legitimately insane. (It gave me a jump scare.)

On 08/12/2020 at around 844 AM, Officer Urrea was in the area of Lodi Ave and the railroad tracks when she saw a male in a wheelchair who appeared to be stuck on the tracks. She noticed that the railroad crossing arms started to come down and saw that a train was approaching. She immediately exited her patrol vehicle and began running towards the male. As the train was reaching them, she was able to pull the male out of the wheelchair and they both fell back onto the ground. The male suffered a leg injury that was tended to immediately by Officer Delgado (who had arrived to assist) and Officer Urrea. The 66-year-old male was ultimately transported to a local hospital for medical treatment. Officer Urrea risked her own life to save another and her actions prevented a tragedy today. We are extremely proud of Officer Erica Urrea and her heroism.

Watch: Son Has to Carry Dad Out of Grocery Store Because of His Anti-Mask Tantrum