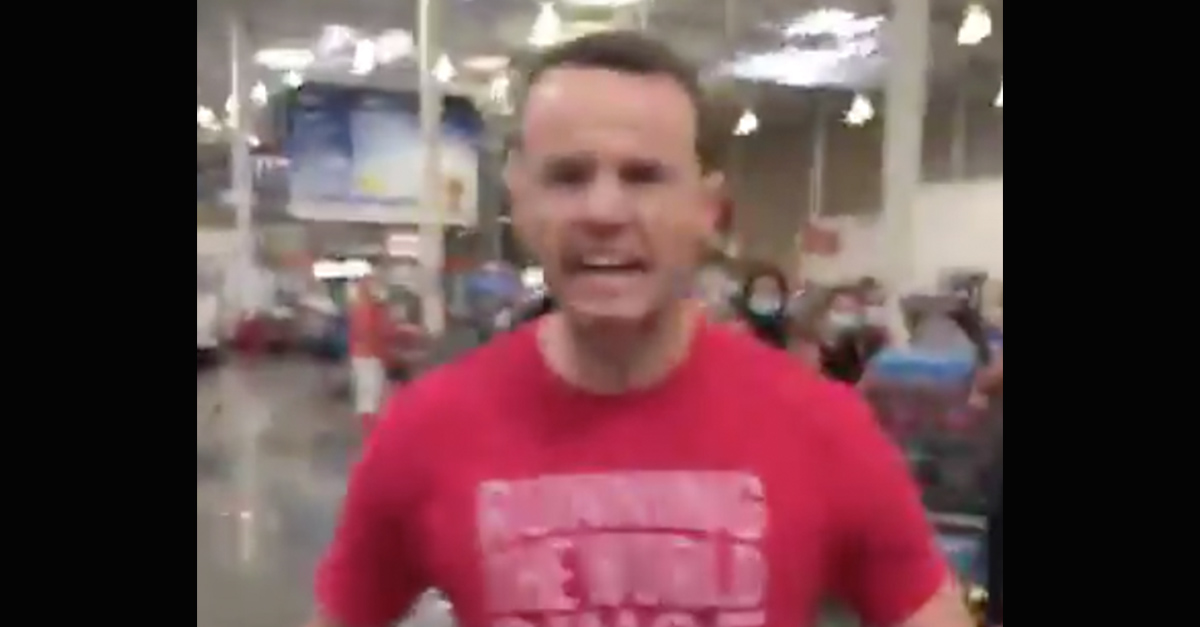 A Florida man who was walking around a Costco in Fort Myers, Florida without a mask on was filmed reacting with loud displeasure (to say the least) toward two customers, one of whom was an elderly woman, who had allegedly confronted him about his lack of Coronavirus safety and concern for the well-being of others at the store.

Florida man at Fort Myers Costco in "Running the World Since 1776" shirt flips out on elderly woman who asked him to wear a mask and man who defended her #BecauseFlorida (via @profjaffar) pic.twitter.com/PDOvi33qHK

Corben, a director of documentaries such as Cocaine Cowboys and ESPN 30 for 30 films The U and Broke, followed up his initial tweet with further elaboration on the incident, writing, “This occurred at the Gulf Coast Town Center location on 6/27 and one of the customers targeted said: “To give Costco the credit, they escorted him out and made me wait inside and monitored him until he left and then they send someone with me to the care to make sure I’m okay.”

The man has since been fired from his job for the outburst.

1. This guy was, in this moment, being a massive and legitimately dangerous piece of shit. On multiple levels. There’s no way around that. There are probably no mitigating factors serious enough to make it worth reconsidering if this man’s reaction was justified. There is nothing to absolve this man. Every ounce of what happened here was despicable. He should be ashamed of this pretty much forever and deserves to be shamed publicly — he felt comfortable enough to behave this way in public, after all. (That said, I don’t feel compelled to share his name, thus adding to the SEO nightmare that will follow him for years if not for the rest of his life, but you can Google it if you really feel the need to.)

3. I’m not sure he should have lost his job, though that is of course at the employer’s discretion. Being stripped of the income needed to provide for yourself and your family (he has a child) doesn’t feel like a reasonably proportional punishment for this at all.

Strip him of his Costco membership (that’s a no brainer). Press charges for harassment or whatever the appropriate charge would be and get him into anger management classes. Make him legally compelled to make amends, based on whatever our actual system of justice prescribes.

4. The theories being tossed around social media about why this guy reacted this way to being asked to wear a mask are the typically short-sighted and dehumanizing takes you’d expect to find on a platform like Twitter. “Entitled white man blah blah blah.” “hIs sHirT* iS pATriOtIC aND pEoPLE wHO lOvE aMeRICA r BAD NOW.”

(*I was previously employed by Grandex, the company that manufactures the man’s shirt.)

The truth is that this man is probably a fairly normal human being who’s had his brain straight-up broken by this country’s cocaine-brained media polarization — much like the people positing the aforementioned reassuringly dehumanizing theories about this man — because his job is (or, was) to sell insurance and be a dad, not to figure out to what degree every piece of news he’s being given by the TV and Facebook is lying to him in order to keep him engaged via rage and fear.

5. That doesn’t absolve him of what he did, though. The vast majority of us consume the same shitty media and don’t have a rage stroke at old ladies for making a reasonable request because they’d like to not have the countdown to the end of their life accelerated while buying 500 liters of Costco brand cola. This was, again, despicable on several levels.

I’m just compelled to assign some measure of blame (perhaps quite a bit) to the system that probably helped convince this man that his enemies are everywhere and that he needed to make wearing a mask his Bunker Hill because of who he is and what he looks like. Because it’s wildly profitable to do so.

Expect more and more and more of this if we keep expecting so little out of the people, me included, who provide us with information.