An Australian couple had luck on their side after they were rescued by a search team from a crocodile-infested swamp after 26 hours. Yes, a freaking crocodile swamp! Can you imagine how scared they must have been? No, thank you!

How was the couple spotted? They kept burning anything they could find and wrote the word ‘Help’ in giant letters. Shantelle Johnson and her partner Colen Nulgit got their vehicle stuck in Keep River National Park in Australia’s Northern Territory during a fishing trip. Both had initially tried to free the car by digging around the tires but eventually gave up realizing that despite their efforts, the car wasn’t going to move.

So, after seeing that they had no other option, they decided to spend the night in their car. This since they were afraid to move after seeing crocodile tracks earlier that day and were worried the tide was going to carry the six meter long reptiles close to where they were stranded.

A huge "HELP" sign written in the mud saves a young #Kununurra couple missing in the Keep River national park https://t.co/WL2sDHwyxw via @abcnews

In an effort to attempt to contact someone, the next day the couple took their belongings and their dog, moving away from the car and the swamp as much as they could. Fortunately, they had told their families where they were going and when they would be back.

That is when authorities were sent to the swamp after family members alerted authorities that they hadn’t returned. After spotting the words in the mud, all three were rescued by a search team at Barfa Gap while flying overhead. Rescuers praised the couple for how they handled the situation and for thinking quickly on their toes.

Which I have to praise as well because this is seriously terrifying. I would have never thought of writing anything on the mud. Better yet, I would have never left my car! I’d stay in there until I was absolutely forced to leave. So scary! 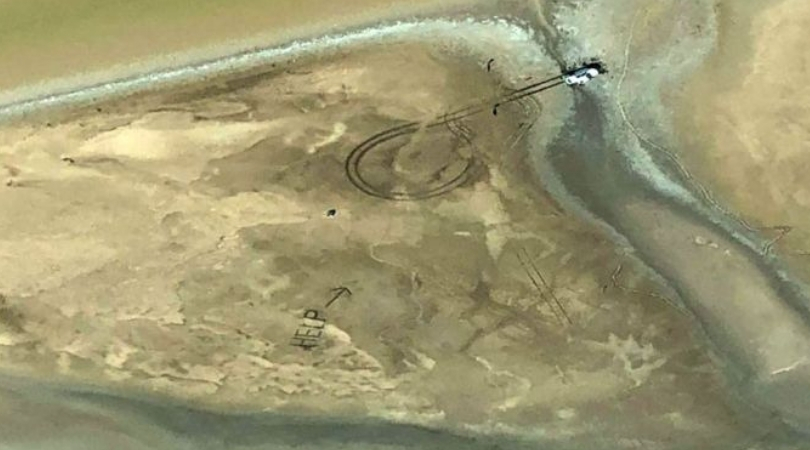