Menu
Follow us
Search
Menu
Search
PULASKI, TN - JULY 11: Members of the Fraternal White Knights of the Ku Klux Klan participate in the 11th Annual Nathan Bedford Forrest Birthday march July 11, 2009 in Pulaski, Tennessee. With a poor economy and the first African-American president in office, there has been a rise in extremist activity in many parts of America. According to the Southern Poverty Law Center in 2008 the number of hate groups rose to 926, up 4 percent from 2007, and 54 percent since 2000. Nathan Bedford Forrest was a lieutenant general in the Confederate Army during the American Civil War and played a role in the postwar establishment of the first Ku Klux Klan organization opposing the reconstruction era in the South. (Photo by Spencer Platt/Getty Images)

Frank Ancona, 51, an outspoken member and Imperial Grand Wizard of the Traditionalist American Knights of the Ku Klux Klan, was found dead along a Missouri river on Saturday, according to Washington County Sheriff Zach Jacobsen and the Kansas City Star.

An autopsy released Sunday confirmed that he died of a single gunshot wound to the head.

Ancona had been missing for days. His wife, Malissa Ancona, said he’d been missing since the morning of February 9, when he left to make a parts delivery on the other side of the state. She said his place of employment called her after he failed to show up to work.

The same day, she posted a Facebook update inquiring about a roommate for Frank on the day that he left. Malissa Ancona said she’d written the status ahead of an expected divorce, which Frank Ancona said he’d initiate after he returned from the work trip.

Leadwood Police Chief William Dickey told the Daily Journal that Frank failed to contact his work or his family members after leaving for work, which was unusual. And his employer confirmed to Dickey that they had not, in fact, asked him to deliver a part across the state.

RELATED: Former KKK Grand Wizard thinks Donald Trump is a great guy but his criticism might surprise you

Officers who could not get in contact with Malissa Ancona visited her home, where they found Malissa and her son, Frank’s stepson, in the driveway. After investigating, officers found Frank Ancona’s safe had been broken into and emptied, likely with a crowbar or other pry device, and that almost all of Frank Ancona’s guns were missing. (The weapon he carried daily, however, was still at the residence; Malissa Ancona turned it over to officers.)

The investigation is ongoing, but police may make an arrest as early as Monday, Feb. 13.

Frank Ancona owned and operated a website for the Traditionalist American Knights of the Ku Klux Klan, a white supremacist group. A page on his website said “This is for Whites Only!” and hosted photos of Klansmen with nooses as well as racist visual depictions of black people.

On a section called “Why Join?” Ancona wrote:

Today, many people have experienced the blacks firsthand. They have seen the savagery and animalism in many of these people. White people simply will not buy the “equality” propaganda anymore and have begun to doubt some of the anti-Klan hysteria that they have been fed in school and from TV and movies.

The site also attempts to cast the group as a non-violent “patriotic” group that “believes in the preservation of the White race and the United States Constitution as it was originally written and will stand to protect those rights against all foreign invaders.” Frank Ancona claimed “We are not a hate group as some will have you to [sic] believe.”

RELATED: Watch the insane brawl that broke out at a KKK rally and ended with a man stabbed by a Confederate flag

In 2015, Frank Ancona told the Kansas City Star he would host Klan members at his house for an annual Christmas party, culminating in “a cross lighting right in my backyard. […] The police kept their eye on us, and people were driving by and taking pictures, but we didn’t have a single incident.”

In the wake of the unrest and rioting in Ferguson in 2015, Ancona and his Klansmen distributed fliers addressing “terrorists masquerading as peaceful protesters” and threatened to use “lethal force as provided under Missouri law.” In the wake of the Michael Brown decision, Ancona told Chris Hayes in an interview that the Ku Klux Klan was ready for “war.” 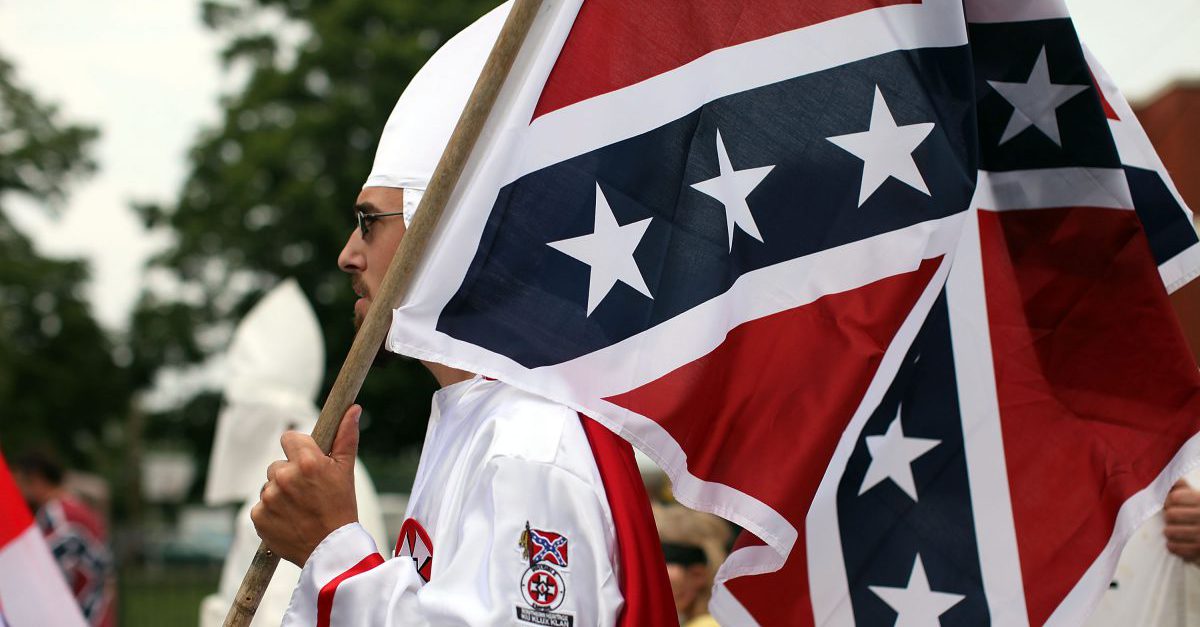