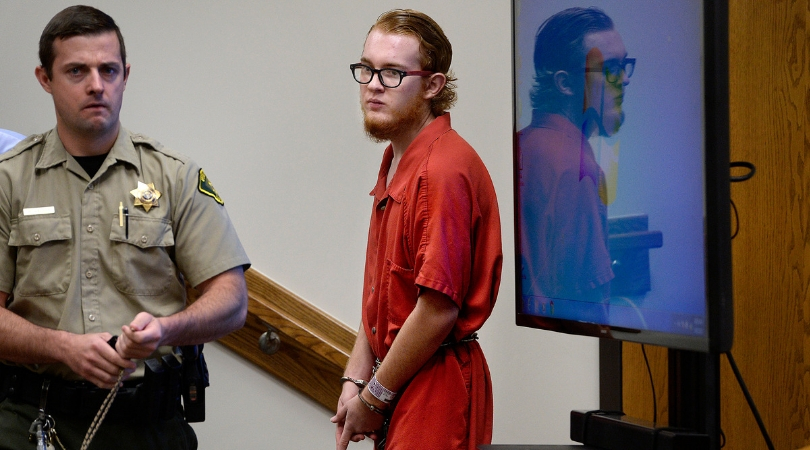 PROVO, Utah (AP) — A Utah man who helped a teenager kill herself and filmed the act to fulfill what prosecutors called a fascination with death, was sentenced Friday to at least five years and up to life in prison.

Tyerell Joe Przybycien, 19, apologized to the girl’s family, saying what he did “doesn’t deserve pity,” the Deseret News reported. The girl’s mother, Sue Bryan, condemned Przybycien as a “sociopath” who researched the fatal hanging ahead of time by carefully measuring rope, nooses and trees.

“There are no words to describe the nightmare that I endure,” Bryan said. “Every day I wake up and have to live the horror of her death over and over.” Jchandra Brown, 16, was a cheerleader with blue streaks in her hair who loved playing with her young nephews and had been making prom plans before she hung herself in a canyon south of Salt Lake City in May 2017, Bryan said.

“She was an anxious downcast teenager. Trying to find her place in the world,” said prosecutor Chad Grunander. Her former high school classmate was “the worst person for her in this trying time of her life.” At one point, Przybycien told a friend that helping her kill herself would be “like getting away with murder,” prosecutors have said.

His grandfather, Larry Przybycien, painted a different picture of him, saying he’d been kind to people over the years, including those with disabilities, and his family wanted him to come home, the Salt Lake Tribune reported. The young man’s use of alcohol and drugs combined with his developing teen brain led to “poor decisions,” defense attorney Gregory Stewart said. Przybycien had just turned 18 at the time when Brown killed herself.

Her body was found by a turkey hunter alongside a cell phone with the video Przybycien made of her passing out and dying. The recording showed him occasionally calling out to her as she inhaled compressed air and stepped off a platform, but not stopping her or trying to help.

Przybycien showed up at the scene crying while detectives were investigating. His lawyers argued against a murder charge in the case, saying suicide notes in her handwriting showed she made her own decision. Judge James Brady disagreed and let the charge stand.

Przybycien eventually pleaded guilty to child abuse homicide in an agreement with prosecutors. He also pleaded guilty to reduced charges after child pornography was found on his phone during the investigation into Brown’s death. He will serve up to five years in that case, though that time will run concurrent with the sentence in Brown’s death.

In Utah, judges hand down indefinite sentences and a parole board decides when inmates are released. The case carried echoes of a young Massachusetts woman, Michelle Carter, who was convicted of involuntary manslaughter last year for encouraging her suicidal boyfriend to kill himself in dozens of text messages when she was a teenager.