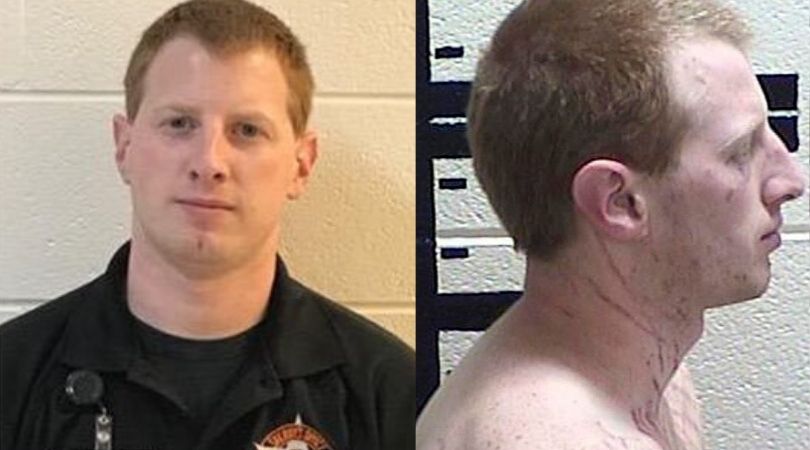 A former Murray County Detention Officer was arrested on rape charges by the Georgia Bureau of Investigation. According to authorities, 28-year-old Kirk Taylor Martin is being accused of sexually assaulting a woman and holding her against her will in her home.

Martin’s disturbing mug shot is making headlines, showing more than a dozen bright red scratches covering his neck, shoulders, chest, and face, as well as swollen eyes which were a result of the victim fighting back.

Martin has also been charged with aggravated sexual battery, criminal attempt to commit sodomy, aggravated assault, false imprisonment and obstructing an emergency call. The woman is said to have been Martin’s ex-girlfriend and was able to contact someone outside the home while Martin was distracted.

According to an affidavit, Martin allegedly told police he “let things get too far,” and he “fucked up” as soon as they arrived at the residence. He said he and the victim had recently broken up and he had moved out of the apartment but he still had a spare key.

North Georgia detention officer arrested on rape charges and police say the scratch marks you see in his mug shot are from the victim fighting back. https://t.co/obHifrjTWx pic.twitter.com/W4U0KPJx5o

According to the victim, she was in the shower when he attacked her. After she refused his advances, Martin admitted to pinning her down, which is when the victim proceeded to scratch him, endlessly. Martin then allegedly used an object to penetrate her while holding her down by choking her and then locked her in a closet after the attack. The former officer only let her out and into the bedroom after she told him they could get back together. When he left the bedroom, she managed to Facetime her mother who called 911.

The affidavit stated Martin found out about the call and picked up a gun in the victim’s house and threatened to kill himself before officers arrived.

Martin formerly worked for the Murray County Jail as a jailer from March 2017 until he was fired in April 2018 for jail policy violations. One incident included Martin giving an inmate the wrong prescription medication. Another incident involved violations of jail policy but did not affect any inmates. The former officer was booked into the Murray County jail and has been denied bond during a court hearing. He is currently at the Rabun County Jail in Northeast Georgia.

Watch: Robin Williams’ 6 Best Impressions to Make You Laugh and Cry at the Same Time