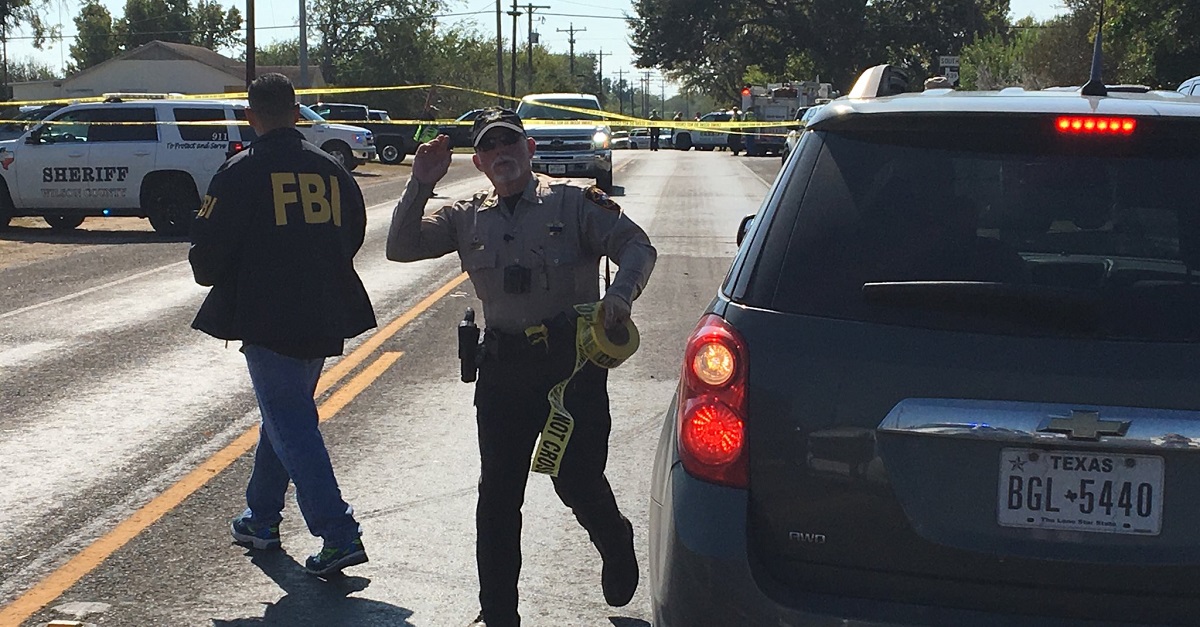 Witnesses say the shooter entered the church at about 11:30 am local time and began firing, with some reporting he reloaded at least once, per KSAT and the Daily Mail. He reportedly entered the church wearing tactical gear and fled the scene after the shooting.

RELATED: A church neighbor with a gun might have helped stopped further carnage in Sutherland Springs

That shooter, who is now dead and no longer an active threat, has been identified as 26-year-old Devin Patrick Kelley of New Braunfels, Texas. Authorities believe that Kelley killed two congregants outside the church before moving inside and killing an additional 23 people. One victim has died after transport to the hospital, leaving the death count at 26 at the moment, according to the Associated Press.

After the shooting, Kelley reportedly left the church and discarded the rifle used in the shooting, according to the Washington Post. He was confronted by a neighbor with a shotgun, who engaged him.

Kelley fled the scene but crashed his car 11 miles from the scene of the shooting, dying of a gunshot wound. At this time it’s unclear if the gunshot wound was self-inflicted or sustained from the neighbor’s shotgun.

Local law enforcement officials have been joined by the FBI at the scene of the shooting, reports CNN. The Bureau of Alcohol, Tobacco and Firearms has responded to the scene as well.

President Donald Trump has said he is “monitoring” the shooting.

May God be w/ the people of Sutherland Springs, Texas. The FBI & law enforcement are on the scene. I am monitoring the situation from Japan.

Later, in a televised statement, Trump made a longer address about the shooting, according to CBS News.

“Our thoughts and prayers are with the victims and families of today’s horrible attack. This act of evil took place as victims and their families were in their sacred place of worship. We cannot put into words the pain and grief we all feel… In dark times such as these, Americans do they what do best: We pull together. We lock hands and we joins arms. And through the tears and through the sadness, we stand strong. Oh, so strong. My administration will provide its full support to the great state of Texas and all local authorities investigating this horrible crime.”

The last high-profile mass shooting at a church took place in September at the Burnette Chapel Church of Christ in Antioch, Tennessee. One person was killed and seven were injured in a mass shooting attributed to 25-year-old Emanuel Kidega Samson.