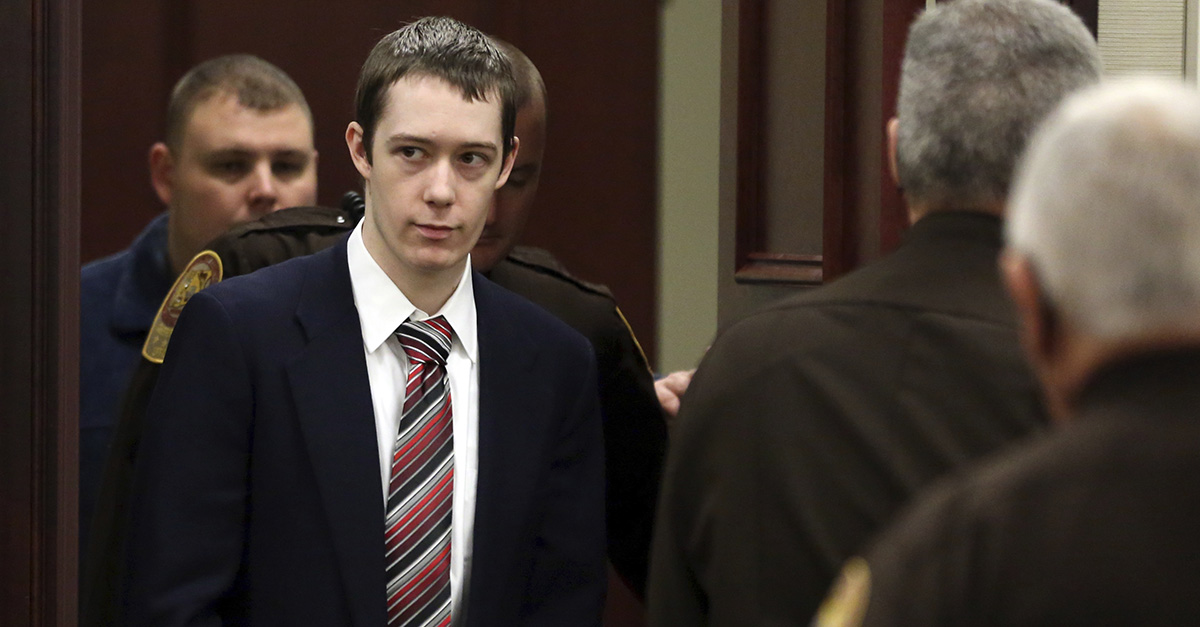 The mother of a 13-year-old girl who was allegedly lured out of her bedroom window and stabbed to death in January 2016, stared down the accused killer, David Eisenhauer, now 20, on the first day of the murder trial Tuesday in Christiansburg, Virginia.

Eisenhauer’s friend, Natalie Keepers, 20, has also been also charged with concealing a body in the case, accused of helping him hide Nicole Lovell’s corpse after she died.

Lovell’s mother, Tammy Weeks, sat forward in the public gallery of the Montgomery County Circuit Court and looked Eisenhauer in the eye as he appeared in court, reports the Daily Mail.

Eisenhauer, a student at Virginia Tech, and Lovell met on the social media app Kik. Prosecutor Mary Pettitt told jurors that Eisenhauer had been communicating online with Lovell for months before he killed her in 2016. Pettitt said Eisenhauer met Lovell at least once before luring her out of her bedroom window.

She said he then stabbed Lovell and left her to die in the snowy woods. Authorities say she also had her throat slashed.

An ex-Virginia Tech student has pleaded not guilty in the killing of 13-year-old Nicole Lovell. Prosecutors say he met her on social media and attacked her when he learned she was underage https://t.co/vqHRisdNbW pic.twitter.com/svAXpG3qnz

The young girl’s naked body was found after a four-day search over the state line in North Carolina. Before she disappeared, she had reportedly told friends that she was planning to sneak out to meet her 18-year-old “boyfriend,” who she said was named David.

Prosecutors say Eisenhauer feared that he and Lovell may have had sex at a party but could not remember, so he decided to kill her. He reportedly said Lovell told him she was 16, but he later found out her real age; he was 18 at the time. A friend of Eisenhauer’s who was interviewed by police reportedly said Eisenhauer feared the girl would “expose” the inappropriate relationship, since she had decided she wanted to continue seeing him.

Authorities say Eisenhauer later asked the friend in a text message if he knew a good place to hide a body.

RELATED: Woman who murdered her husband in 2014 denied his pension benefits

Last year at a preliminary hearing, Detective Ryan Hite of the Blacksburg police said Keepers told investigators that she and Eisenhauer debated a variety of methods of killing Lovell, such as drugging her to make it look as if she committed suicide, or knocking her out and leaving her to die of exposure to the winter elements.

Authorities say the pair decided to follow what Keepers allegedly called the “official plan”: “Grab her from behind, cover her mouth and slit her throat.”

Keepers reportedly told police that she did not witness Lovell’s death.

According to the Richmond Times-Dispatch, Keepers described Eisenhauer as a ?sociopath? and herself as a ?sociopath in training.? She reportedly said that being involved in the murder made her feel like she was in a ?special club.?