Whitey Bulger Would Have Rather Been Back in Alcatraz, According to Letters 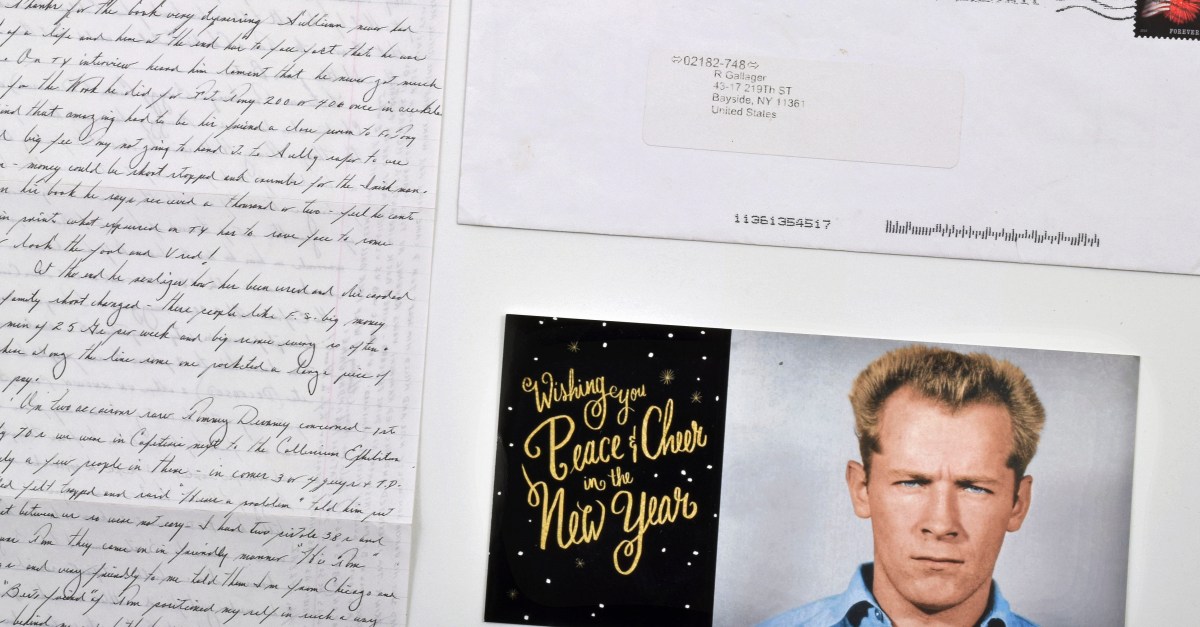 BOSTON (AP) — Locked up for life after 16 years on the run, murderous Boston gang boss James “Whitey” Bulger couldn’t stand how much the world around him had changed.

Prison was nothing like his days at Alcatraz, with its “great view” and clear-cut rules, Bulger said. And the former Irish Catholic stronghold of South Boston he once terrorized was now filled with “rich college kids living in expensive condos.”

“World has changed … everything different, even the neighborhood,” Bulger wrote to a friend he met in the lockup in newly public letters.

The letters, which are being auctioned Sunday, provide a glimpse into the once powerful and feared gangster’s mundane life behind bars before he was beaten to death by fellow inmates last year. Bulger wrote about the little excitements of prison life — “tonight we had an ice cream cone!” — and his treatment by other inmates.

“Almost every time I’m going anywhere, guys ask “hey old timer, want a push” … or just grab handles and start pushing,” Bulger wrote in a letter postmarked in February 2015. “One advantage is we can go in the front of chow line if in wheelchair.”

Tonight! At 9/8c explore the journeys of some of the most well-known names in the world of crime, and a look at how they began as unknown thugs and transformed into globally notorious kingpins. Tonight we kick off with Whitey Bulger. Raised in a South Boston housing project, Bulger, who earned his nickname as a child for his light blond hair, served time in federal prison in the 1950s and early 1960s for bank robbery. Afterward, he returned to Boston, where he eventually built an organized-crime empire with partner Stephen Flemmi. At the time the two men were involved with drug trafficking, extortion, murder and other illegal activities, they were serving, since the mid-1970s, as FBI informants, providing information about rival mobsters in return from protection from prosecution. After a rogue FBI agent tipped off Bulger that he would soon be arrested on racketeering charges, Bulger disappeared in December 1994. Despite an international manhunt, Bulger eluded authorities for over a decade and a half. Then, on June 20, 2011, the FBI employed a new tactic by airing a public service announcement focused on Greig, Bulger’s companion. The ad, which aired in cities across the U.S. where the mobster was thought to have once lived or have contacts, was aimed at female viewers who might have seen Greig, who underwent a variety of cosmetic surgeries, at a beauty parlor or doctor’s office. Based on one of the tips they received, FBI agents staked out Bulger and Greig, then going by the names Charles and Carol Gasko, and arrested them without incident at the modest, two-bedroom Southern California apartment building they had long called home. Law enforcement officials found weapons, fake identification and more than $800,000 stashed in Bulger’s apartment. On August 12, 2013, he was convicted in a federal court in Boston of 31 of the 32 counts against him, and on November 14, 2013, a federal judge sentenced Bulger to two life terms in prison plus five years. #Kingpin #WhiteyBulger #CrimeHistory #History

Authorities have said two Massachusetts mobsters are under investigation for 89-year-old Bulger’s killing, but no one has been charged. His death hours after he was transferred to a troubled West Virginia prison has raised questions about why the known “snitch” was placed in the general population instead of more protective housing.

Bulger ratted on the New England mob to the FBI, authorities said, though he insisted throughout his trial that he wasn’t an informant but was actually paying the FBI for the scoop on his enemies.

The auction house got the letters from a man who says he became friends with Bulger when the geriatric gangster was briefly held at a federal lockup in Brooklyn after being convicted in 2013 of participating in 11 murders, among other crimes.

That man, Timothy Glass, said he took Bulger under his wing, and they bonded over their criminal pasts. Glass recalled how Bulger would sign autographs for inmates who asked but had a tendency to give a “death stare” to guys he didn’t like.

Best father and son talk to happen in the history of movies 👌😂 . Taking black mass to school, hoping to watch it instead of having a lesson🙏 . {#johnnydepp #blackmass #jamesbulger #whiteybulger #son #dakotajohnson}

Glass was locked up on robbery and other charges when he met Bulger after spending more than a decade in New York state prison for separate crimes, he said. Inmates weren’t allowed to write to one another, so after Bulger was transferred to a different prison, Bulger would send the letters to a friend on the outside, who would get them to Glass, he said.

In the letters, Bulger complained about the cost of books (“$32 for the book!”), the cold weather (“All the liberals like VP Gore made a fortune with his scaring people with talk of ‘planet warming”’) and the media, which he called “part of and parcel of the corruption instead of society ‘watchdogs.'”

He grumbled about his trial, slammed prosecutors for deals they made with his former friends and promised his appeal would “create quite a stir.” He also bemoaned what he saw as the unfair treatment of his longtime girlfriend Catherine Grieg, who was sentenced to eight years for helping Bulger avoid capture.

“I played a rough game and accepted the rough treatment. But feel Catherine was treated too harshly,” Bulger wrote.

He talked longingly about his time at “The Rock” — Alcatraz — where the rules were “plain and understood” and inmates were allowed at Christmastime to buy chocolate, which they would share with prisoners who weren’t supposed to have candy.

“Here, ‘they,’ the ‘inmates,’ would sell you chocolate! Back then no one ever looked to make a profit on another convict,” he wrote. “I look back at those years and place with nostalgia. It’s all gone.”

Tucked into some of the letters were pictures of Bulger as a young man or Alcatraz. On the back of one of the photo — a mugshot taken in 1965, the year Bulger was released from prison and returned to South Boston — he scribbled: “the good old days.”

With another letter, Bulger included a holiday card that he apparently made in 2015 with the message in gold script: “Wishing you peace & cheer in the New Year.” Next to the cheery greeting is Bulger’s Alcatraz mugshot, his eyes piercing blue eyes narrowed and brows furrowed.

Watch: Steph Curry Makes More in 1 Game Than Some Families Do in 10 Years