Neil Young protested against Joe Rogan and therefore, Spotify, so his old bandmates made sure to have his back. Like Young, the folk-rock trio Crosby, Stills and Nash bolted Spotify.

But guess what? They’re back, restoring their entire catalogue after removing it in February. That’s when they sated “we support Neil and we agree with him that there is dangerous disinformation being aired on Spotify’s Joe Rogan podcast.”

Young, of course, has not returned, and all of his stuff remains off Spotify and instead on Amazon Music.

By the way, David Crosby, Stephen Stills and Graham Nash split in 2015, and given their collective ages, aren’t likely to resurface with any new material. Crosby and Nash are each 80-years old, and Stills is 77.

Along with Young, Crosby, Stills and Nash were upset with some of Rogan’s COVID-related takes on his popular podcast, The Joe Rogan Experience.

“There are people worse than Rogan …Tucker (Carlson) leaps to mind but there are many people selling outrage by lying …I despise all of them ….they know they are lying ,,, causing harm …but they do it anyway for bucks,” Crosby tweeted back in February. “I just don’t want my music on there if he’s on there so I’m taking mine off …that is not censorship.”

Rogan has said he is not an anti-vaxxer, and thwarted off such accusations.

“Amid the criticism, Rogan said in an Instagram video that he would make more of an effort to “balance out” the controversial opinions on his show,” People relayed.

Crosby, Stills and Nash formed in Los Angeles in 1968, producing such hits as “Ohio,” “Teach Your Children” and “Our House,” among many others. Young joined them briefly in the early 1970s to form Crosby, Stills, Nash and Young. 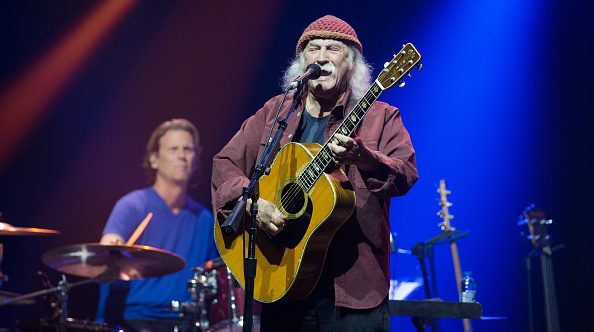