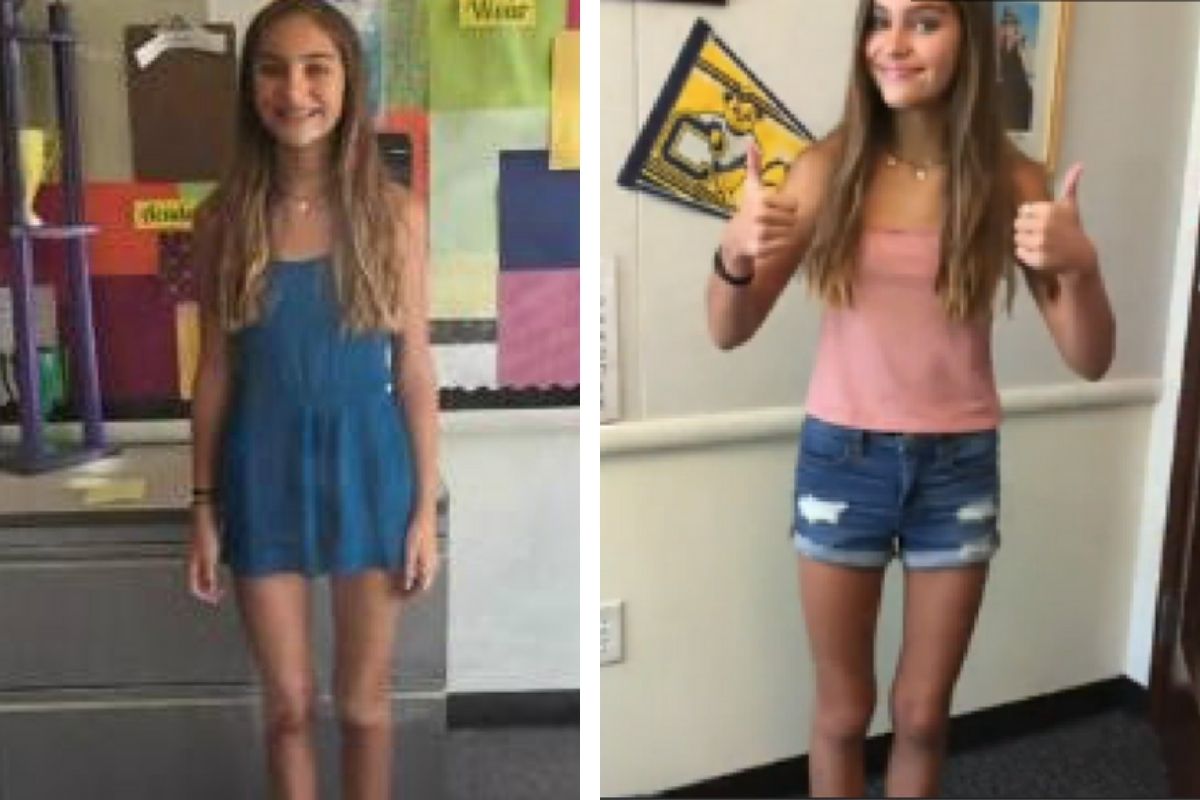 via KTVU
via KTVU

The father of a middle school girl is standing up for his teen daughter after she was cited for violating her school’s dress code.

Los Gatos, California Raymond J. Fisher Middle School officials informed 13-year-old Demetra Alarcon that the blue romper she wore to school recently on a hot day was distracting to boys. Her father Tony brought her a change of clothes to his daughter’s school— denim shorts and a tank top — but school officials determined that the new outfit was inappropriate as well. The father found a pair of leggings in the car as backup but says the dress code (which also bans spaghetti straps, halter tops, and midriff tops) unfairly targets girls.

“I mean, today it’s 90 degrees outside, and she’s wearing leggings because she doesn’t want to be dress-coded for wearing shorts. And it’s not okay. It needs to change,” Tony Alarcon said to CBS News before adding, “Demetra isn’t alone. Just sit in Fisher’s parking lot and you’ll see that. I’ve heard from multiple girls that they just want to be comfortable, but they feel like they’re being pushed into wearing leggings in 100-degree heat. I was told by an administrator that the girls’ clothes are a distraction to the boys. That shouldn’t be a concern.”

While Alarcon, an investment banker and real estate executive, agrees students should be dressed appropriately for school, he doesn’t agree tank tops in extreme heat should be a dress code violation. He also added that it’s difficult to find girls’ shorts that meet the school’s 4-inch inseam requirement in most stores. He finds the regulations on girls’ clothing to be unnecessary shaming and discriminatory to female students, so he’s fighting back saying, “You have to stand up for what’s right and that’s what I’m doing.” He later told the Today show “You get pulled out of class in front of everyone…She’s just a kid. She’s just 13. She’s not a sex symbol. She just wants to be comfortable and attend class and we’re not affording her that opportunity.”

The school district met Monday night to discuss the dress code policy but did not announce any changes yet. Fisher school principal Lisa Fraser defended the code in a statement that read, “There has always been a dress code. These are standards for reasonable decorum. I do reserve the right to set guidelines for the school, but I want to lead with the pulse of the community and reflect the community’s core values.”

Editor’s note: This article was originally published on September 14, 2017.