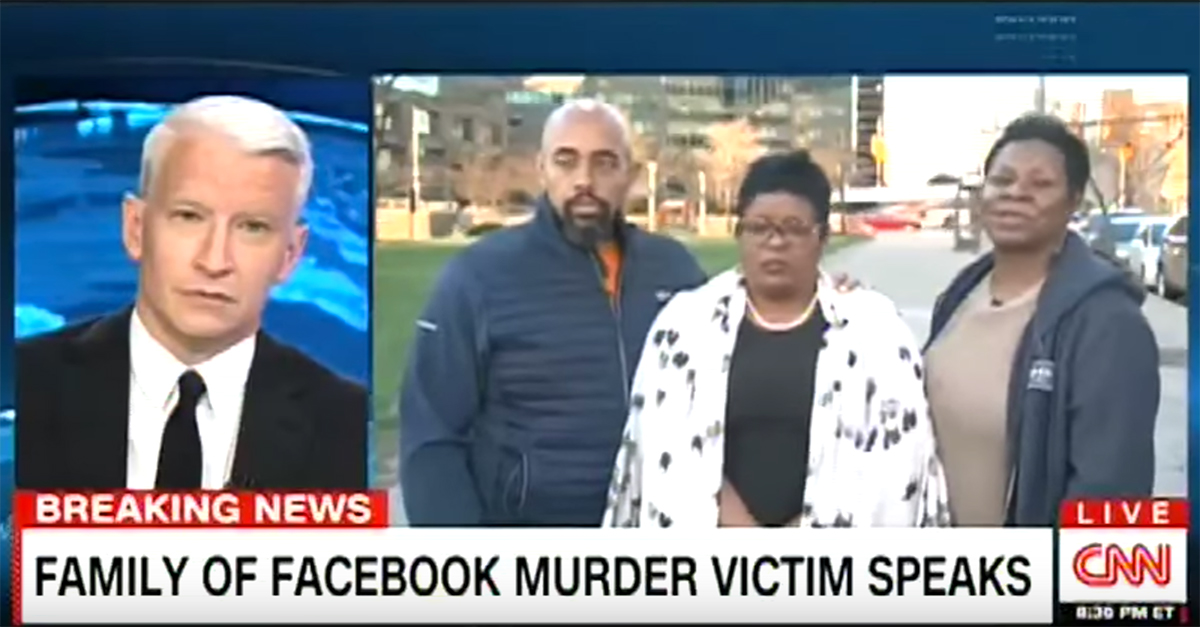 CNN’s Anderson Cooper conducted a remarkably heartfelt interview Monday night as the daughters of Robert Goodwin, Sr. — the 74-year-old man whose murder was posted online in a Facebook video — revealed an incredible capacity for compassion and faith, even as the murderer remains at large.

Debbie Goodwin and Tonya Godwin Baines were amazingly forgiving of the man responsible for shooting and killing their father.

“I would say turn yourself in, that would be number one,” Debbie Goodwin answered in response to Cooper’s question of what she would tell Steve Stephens, the man who murdered her father and continues to allude authorities. “I mean, because although I do believe in forgiveness, I do believe in the law, meaning, when you break the law, there’s a penalty for breaking the law. And this man broke the law by taking my father’s life.”

RELATED: Before he gunned down an innocent man, Steve Stephens worked with kids

“And so although I forgive him, there is still a penalty that he must pay for what he did to my dad. And so I would want him to turn himself in. And you know what, I believe that God would give me the grace to even embrace this man. And hug him.”

This is me and my dad on Father's Day 2015. #RobertGodwinSr RIP. pic.twitter.com/B2X0suE4AR

Godwin continued: “Without anything, I truly do, it’s just the way my heart is, it’s the right thing to do. And so, I just would want him to know that even in his worst state, he’s loved, you know, by God, that God loves him, even in the bad stuff that he did to my dad. That he’s still loved. And that he has some worth while, even though he’s gonna have to go through many things to get better, there’s worth in him.”

“And as long as there’s life in him, there is hope for him, too. I do believe that.”

Baines reiterated that they forgive the killer. Cooper responded by saying, “You do?”

“We want to wrap our arms around him,” Baines said.

RELATED: Police are still scratching their heads about the Cleveland Facebook killer

Goodwin then explained why: “We absolutely do. I honestly can say right now that I hold no animosity in my heart against this man because I know that he’s a sick individual. I know that because of his sickness, whatever evil overtook him that caused him to do this to my dad, it’s not him. It wouldn’t be something he would typically do, and I promise you, I could not do that, if I did not know God.”

“If I didn’t know Him as my God and my savior, I could not forgive that man. And I feel no animosity against him at all. Actually I feel sadness for him. I do.”

“I think a lot of people watching tonight, and I know I certainly speak for myself, I wish I was a Godwin right now, because you all represent your dad very well,” Cooper said. “Thank you so much. I wish peace and strength in the days ahead.”