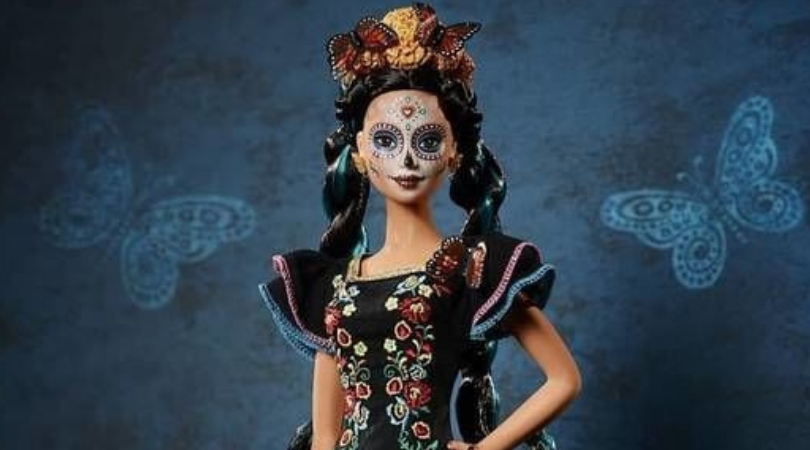 It’s official, Mattel will be releasing a limited edition “Dia de Muertos” themed Barbie doll in honor of the approaching Mexican holiday. Let me tell you, she is absolutely gorgeous! Also known as “Dia de Los Muertos” or “Day of the Dead” in English, the holiday is celebrated throughout Mexico and by people of Mexican heritage. The multi-day holiday involves friends and family gathering to pray for and remember those who have died and help support their spiritual journey.

Many view the holiday as a day to celebrate those who have passed away, rather wallow in sadness, believing their loved ones are “awake and celebrating with them.” As far as traditions, people usually offer “ofrendas,” honoring the dead using Aztec marigolds, Calaveras, and leave the person’s favorite food and beverages on their graves for them “to enjoy” in the afterlife.

The new doll reflects Mattel’s efforts to showcase more inclusion in the Barbie line-up collectibles. Notably, Mattel recently released dolls based on Mexican artist Frida Kahlo and civil rights icon Rosa Parks as part of the “Barbie Inspiring Women” series. The toy company hopes that the historical figures behind the dolls serve as a role model for young girls.

Switching up Barbie’s traditional blonde “California girl look,” the “Barbie Dia de Muertos” has dark hair tied in a braid and has on a long, black dress decorated with skulls, monarch butterflies, and marigolds which are all symbols of the holiday. The doll, who looks like she just came out of the movie “Coco,” also has a Calavera (Skull) face painted and a crown of marigolds, as well as butterflies perched on her hand and on her crown. She appears to be inspired by the popular La Calavera Catrina holiday costume.

Dia de Los Muertos begins on October 31 and ends on November 2. Mattel is said to release the doll on September 12, just in time for the colorful holiday and will be sold for $75 through Walmart. As someone who has always looked up to the holiday, and has celebrated it for years, this is definitely a step up for Mattel. I only wish they would have created one sooner. My 5-year-old self would have been ecstatic. This will make so many girls, or boys, happy.